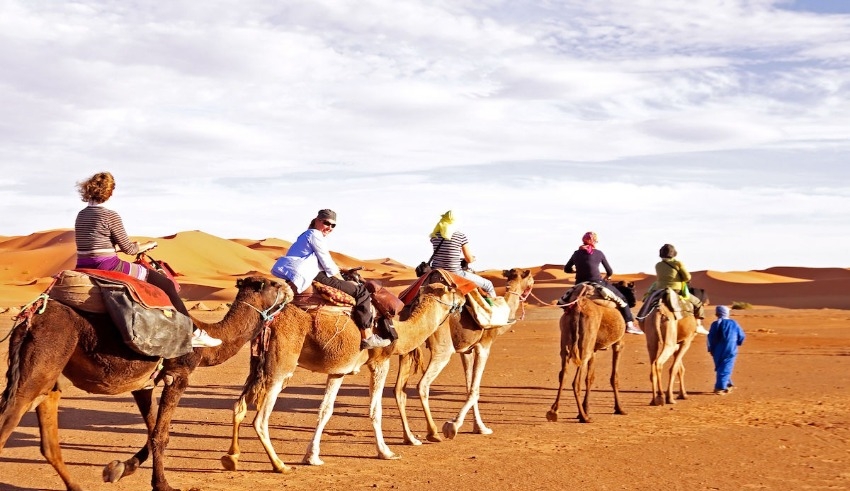 According to Krockenberger, in this socially conservative area, Al Lisaili, it's rare to see women going down the street or riding camels before the school.
(c) Matador Network

DUBAI: The first officially approved camel riding school in the United Arab Emirates (UAE) is located on the wind-carved sand just outside the air-conditioned metropolis of Dubai.

Camels have played a significant role in the region’s history for a long time. One-hundred and fifty years ago, the Arabian Peninsula’s single-humped camel, the dromedary, was tamed and used as a mode of transportation, to convey commodities, and as a source of wool, milk, meat, and leather. The most common places to see them now are from the side of a desert highway or at resorts and camps in the desert, where tourists can take a short camel ride.

Perhaps it’s strange that there aren’t more of these institutions in a country with such deep ties to wildlife. One of the two founders of the Arabian Desert Camel Riding Center (ADCRC), 30-year-old German expat Linda Krockenberger, is a woman in a typically male-dominated practice like camel riding.

Camel Riding as a beloved sport

As a reciprocal arrangement, camel owners gave the animals with food, water, and shelter; in return, they received a variety of goods, including transportation, food, and clothing. The camel became a symbol of Emirati culture as a result of this, making it possible to live in the harsh desert environment. Camel racing, a popular spectator activity in the United Arab Emirates, was another benefit camels supplied to the country’s residents.

Dromedary camels have been tamed for thousands of years on the Arabian Peninsula. These single-humped animals, also known as Arabian camels, were once employed as a means of transportation, as well as a source of food.

In the UAE nowadays, camel festivals are common and camel racing is a huge business, with robot jockeys and prize money in the hundreds of thousands of dollars for the most lucrative races.

There are now 15 separate tracks in the UAE where camel racing takes place. These tracks, like the Al Wathba in Abu Dhabi and the Dubai Camel Racing Club, are vast and high-tech facilities with all the necessary equipment. Ras Al Khaimah, Sharjah, and Umm Al-Qaiwain also have camel racing courses.

Every weekend between November and April, there is a race somewhere in the United Arab Emirates. Camel race enthusiasts from all around the world gather for a two-day celebration of the sport. In the past, winners of races were granted necessities like food and animals, but today they are given automobiles, cash, and awards in their honor.

On Women taking the lead

In January 2021, the school was constructed in an agricultural settlement called Al Lisaili, just over 12 miles from Dubai, on the edge of the Al Marmoom desert. According to Krockenberger, in this socially conservative area, it’s rare to see women going down the street or riding camels before the school.

There are now 30 regular riders at the school, the majority of them are female. “At first, we didn’t specifically target women,” she explains. “The fact that I was a woman and a member of the school attracted a lot of attention.”

While working in the UAE’s hospitality industry, Krockenberger fell head over heels for the desert landscape. She had previously rode horses in Germany and was eager to give camels a try as well. Despite her long search, she claims that her gender was an impediment to finding a ride in Dubai.

By virtue of Al Falasi’s esteem in the community, Krockenberger claims they were granted the first ever license for a camel riding center in the United Arab Emirates.

Women can only ride camels at a licensed center because “else it’s culturally not appropriate,” she says.

It’s crucial for Krockenberger to be properly recognized, he explains.

“Because we act as an institution, our efforts have broader ramifications for women throughout the region. There is an initial level of acceptance, which then spreads outwards to the broader community.”

It was first a matter of proving to the community that they were capable of riding safely, according to Krockenberger. In the beginning, “we had a lot of friction,” she recalls. “We thought it was our one chance to show that women can ride, too. In other words, we didn’t want to jeopardize our chance.”

They’ve proven themselves and are now building the country’s first all-female camel racing squad, led by Krockenberger. As of November 2021, the ADCRC has hosted the first official women’s camel race in the United Arab Emirates (UAE), which was attended by over 200 spectators.

Metal stirrups are not used when riding the camels, which may reach speeds of up to 40 mph (64 km/h). She and her team don’t whip the camels, which is unusual for most camel racing teams. However, for individuals who only want to learn to ride, the pace is substantially slower.

She claims that “camels are very intelligent and incredibly emotional.”

“In addition, they create strong bonds with each person they meet. Although a camel will always be a little feral, understanding the bond with the animal is essential.”