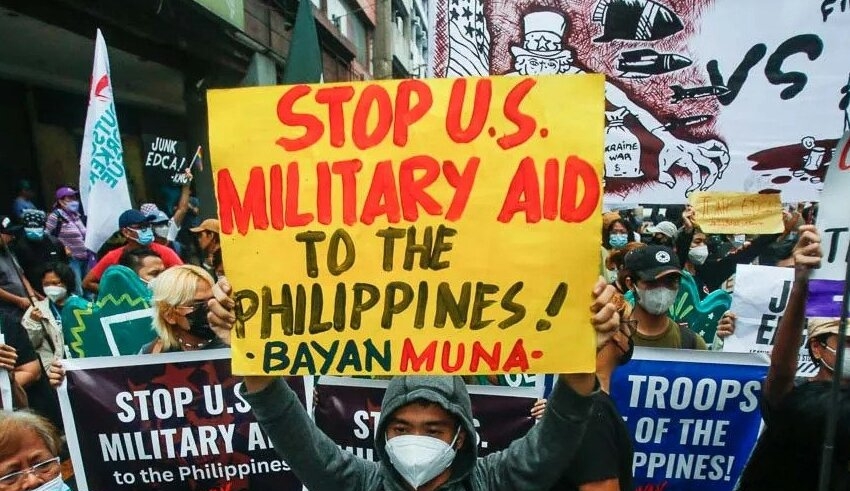 Groups organized by Bagong Alyansang Makabayan (BAYAN) led the march in Morayta, Manila. However, officers of the PNP prevented them from leaving the area.
(c) Rappler

Progressive groups organized a demonstration in response to the historic visit of US Vice President Kamala Harris to the Philippines.

According to activists, the second-highest ranking US diplomat is “not welcome” in the country.

On Monday, November 21, Harris will meet with a limited number of activists and human rights organisations to address the human rights situation and democracy in the Philippines. The US embassy in Manila has yet to offer information regarding the aforementioned event.

Groups organized by Bagong Alyansang Makabayan (BAYAN) led the march in Morayta, Manila on Monday morning. However, officers of the Philippine National Police prevented them from leaving the area.

The progressive organizations then attempted to circumvent a police blockade by taking the opposite way, but they were prevented from doing so. The gangs continued to search for alternative methods to breach the roadblock, but the police pursued them.

They eventually compromised and staged the event on Recto Avenue. The numerous groups’ placards demanded the withdrawal of the United States’ military presence and military aid in the Philippines.

Raymond Palatino, a BAYAN member and former Kabataan congressman, was among the protest leaders. According to him, Harris’ visit is detrimental since it will increase US military funding to the Philippines.

Former Gabriela lawmaker Liza Maza, who was also present at the demonstration, stated that Harris intended to utilize the Philippines in the US’s fight with China.

Various progressive organizations have called for the abolition of the Visiting Forces Agreement and the Enhanced Defense Cooperation Agreement, which bind the Philippines’ military ties to the United States, for years.

Standard U.S. support includes anti-terrorism equipment. The national police also receives crisis response equipment from the United States. Between 2016 and 2019, the United States was able to provide the Philippines with $267 million in foreign military financing for the purchase of defense assets.