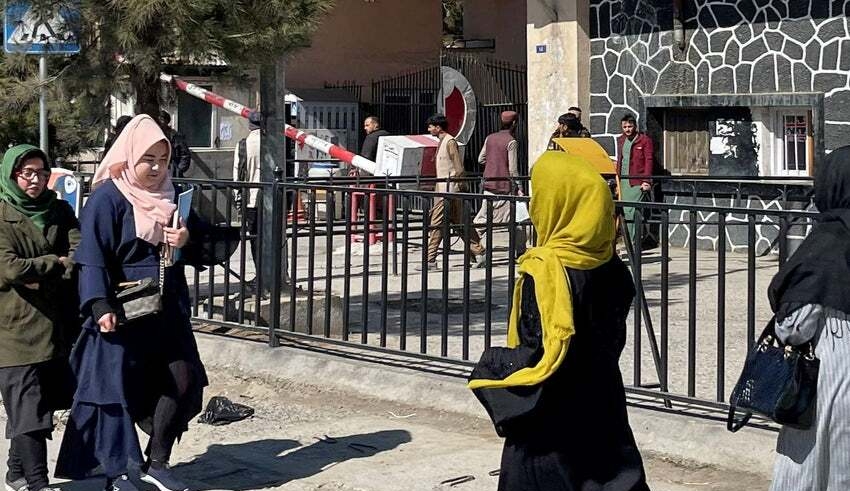 Female university students in Afghanistan were barred from campus after the Taliban-led government announced a ban on tertiary education for women.

In a Tuesday evening letter to colleges, the minister of higher education revealed the decision to exclude women, bringing censure from international countries and the United Nations.

Shaista, a business studies student at a private institution in Kabul, remarked, “When we arrived at the campus, the Taliban stood at the entrance and informed us, ‘You are not permitted to enter the university until further notice.'”

A lecturer at a different institution in Kabul who declined to be identified stated that employees had no option but to enforce the directive and turn away female students at the entrance.

The prohibition on female students is expected to impede the Taliban government’s efforts to seek international legitimacy and lift sanctions that have a devastating impact on the economy.

Hassiba, a Kabul-based third-year political science student, claimed she was preparing for her exams when she heard the announcement.

“How can we be optimistic about the future when there is no education for women in a society?”

Cabinet members of the Taliban government made the decision, according to a late Tuesday release.

In recent months, some Taliban leaders, including the deputy foreign minister and administration spokeswoman, have advocated for female education.

The spiritual head of the Taliban, situated in the southern city of Kandahar, has the last say on critical matters.

Diplomatic and official Taliban sources informed Reuters that the matter was being discussed by the leadership.

“This decision had been expected for weeks, causing some Western authorities to begin discussing extra sanctions and economic limitations,” said Graeme Smith, a senior consultant at International Crisis Group.

“However, the avalanche of Western fury will reinforce the Taliban leadership, which portrays itself as a fortress against the outside world.”

The leadership of the Taliban has stated that they desire peaceful ties with the world community, but that outsiders should not meddle with local issues.

Most females are unable to continue their education past the basic level. The Taliban government has said that it is developing a plan for secondary education for girls, but has not provided a timeline.

The administration did an unexpected U-turn on March plans to open all high schools to girls.