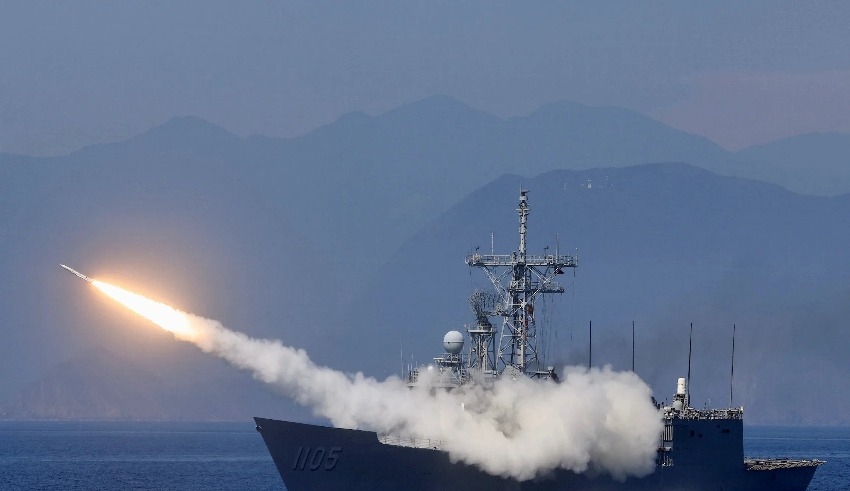 The Taiwanese defense has stated that its land-based anti-ship missiles as well as its Patriot surface-to-air missiles are in a ready-to-fire position.
(c) Rappler

On Sunday (August 7), Chinese and Taiwanese warships engaged in a game of high-seas “cat and mouse” just hours before the scheduled end of four days of unprecedented Chinese military exercises that were launched in response to a visit to Taiwan by the Speaker of the United States House of Representatives Nancy Pelosi.

Pelosi’s trip to the island, which is self-governed, incensed China, which retaliated by conducting test launches of ballistic missiles over the island’s capital for the first time and by severing communication lines with the United States. Pelosi’s trip took place a week ago.

According to a person familiar with the situation, approximately ten warships came dangerously close to one another in the Taiwan Strait, with some Chinese vessels crossing the median line that serves as an unofficial barrier between the two sides.

The individual said that “the two sides are showing restraint” while describing the maneuvers as being similar to “cat and mouse” on the high seas.

“One side attempts to cross, but the other side blocks their path, which puts them in a worse position than they were in before, and then the first side eventually returns to the other side.”

Taiwan has stated that its land-based anti-ship missiles as well as its Patriot surface-to-air missiles are in a ready-to-fire position.

The Chinese exercises, which are based in six different places throughout the island, got underway on Thursday and are due to end at midday on Sunday. The Chinese military announced on Saturday that it was conducting sea and air joint exercises north, southwest, and east of Taiwan with the goal of testing land-strike and sea-assault capabilities. The drills were taking place north, southwest, and east of Taiwan.

The United States described the exercises as an increase in their level of intensity.

“China’s efforts to shift the status quo have reached a new level of intensity with the implementation of these initiatives. They are reckless, inflammatory, and increase the likelihood of making a mistake in calculating,” a spokeswoman for the White House stated.

“Also, they go counter to our long-standing purpose of preserving peace and stability across the Taiwan Strait, which is what the international community anticipates from us,” we said.

As part of its reaction to Pelosi’s visit, China cut off connection with the United States through a variety of different channels, including communication between military theater commands and communication regarding climate change.

Antony Blinken, the Secretary of State for the United States of America, has accused China of taking “irresponsible” moves and shifting its focus from the pursuit of a diplomatic resolution to the use of force.

And the Eastern Command of the Chinese Army posted a photo that it claimed was taken of a warship patrolling the waters near Taiwan, with the shoreline of the island visible in the background of the snap.

On Saturday, the military of Taiwan stated that the Chinese ships and planes that were participating in the drills were staging a simulated attack on the island, which China claims as part of its territory.

The Ministry of Defense of Taiwan later said that its armed forces had launched fighter jets in an attempt to scare away 20 Chinese aircraft, 14 of which had crossed the middle line. In addition to this, it discovered 14 Chinese ships operating in the region surrounding the Taiwan Strait.

A photograph that was shared by the ministry showed Taiwanese sailors keeping a careful eye on a Chinese vessel that was nearby.

On Friday, Taiwan’s armed forces used flares to ward off mystery aircraft and drones that were flying above the country’s Matsu and Kinmen islands. Both island groups are located quite close to the coast of China.

According to the statement made by the ministry, “China’s military maneuvers have unilaterally changed the prevailing situation in the region and significantly harmed the peace in the Taiwan Strait.”

New military exercises are scheduled to take place in the Yellow Sea until August 15, according to an announcement made by Beijing. The Yellow Sea is located between China and the Korean peninsula.

Pelosi, a long-time critic of China and a political ally of US President Joe Biden, arrived in Taiwan late on Tuesday evening on the highest-level visit to the island by an American official in decades, despite warnings from China. This was despite the fact that Pelosi’s visit was the highest-level visit to Taiwan by an American official in decades. She stated that the visit demonstrated an unshakeable commitment on the part of the United States to support Taiwan’s democracy.

She stated that there is a choice that must be made between despotism and democracy throughout the world. In addition to this, she was quite clear that the purpose of her trip was “not to change the status quo in Taiwan or the region.”

China has stated that its relations with Taiwan are a domestic issue, and that it retains the right to bring Taiwan under its authority by whatever means necessary, including the use of force. Taiwan refutes China’s assertions, stating that only the people of Taiwan have the authority to determine the country’s path forward.

Blinken made these remarks while he was on a visit to the Philippines. He stated that the United States has been hearing alarm from partners about what he termed China’s dangerous and destabilizing behavior, but that Washington aimed to avoid aggravating the situation.

He stated that China’s decision to stop engaging in bilateral discussion in eight essential areas was a move that would penalize the entire world.

China has not brought up the possibility of suspending military negotiations at the most senior levels, such as those with the United States Defense Secretary Lloyd Austin and Chairman of the Joint Chiefs of Staff General Mark Milley. Officials have indicated that these conversations should take place more frequently because they are crucial in the event of a crisis.

The Japanese Ministry of Defense reported late last week that five of the nine missiles that had been fired toward Japan had landed within Japan’s exclusive economic zone.