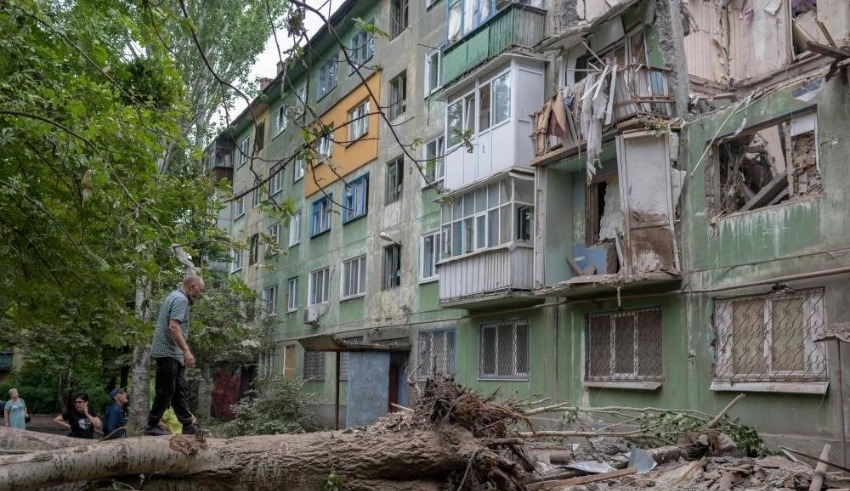 Kiev and Moscow have pointed the finger of blame at each other for the attacks that took place at the Zaporizhzhia, the largest nuclear power complex in Europe.
(c) The Manila Times

After the operator of the facility reported significant damage at the site, the President of Ukraine, Volodymyr Zelenskyy, made the accusation that Russia was using the Zaporizhzhia nuclear power station “for terror” on Saturday, August 6th.

The company that runs the nuclear power station in Zaporizhzhia, which is located in the southern region of the country, Energoatom, reported on Saturday that parts of the facility had been “seriously damaged” by military strikes, and that one of the plant’s reactors had to be shut down as a result.

According to Energoatom’s statement on the Telegram messaging app, the attacks on Friday caused damage to a station that contained nitrogen and oxygen as well as an auxiliary facility.

An important official was reportedly killed by pro-Moscow authorities in the Russian-occupied area of Kherson as fighting continued in other parts of Ukraine’s east and south.

And the head of Amnesty International’s Ukraine office made the announcement that she would be resigning from the organization over the publishing of a controversial report that accused the country’s military of harming people. The study was written by Amnesty International.

Both Kiev and Moscow have pointed the finger of blame at the other for the attacks that took place at the Zaporizhzhia plant, which is the largest nuclear power complex in Europe.

In his evening address on Saturday, Zelenskyy once again accused Moscow of terrorism, saying, “Russian terrorists became the first in the world to exploit the power plant… for terror.” Zelenskyy was speaking to an incident that occurred on Friday.

Josep Borrell, the senior diplomat for the European Union, issued a statement condemning the strike, describing it as “a serious and irresponsible infringement of nuclear safety laws and another illustration of Russia’s contempt for international norms.”

Concern was also voiced by the head of the nuclear inspector for the United Nations. According to Rafael Grossi, director general of the International Atomic Energy Agency, the strikes highlight “the very real possibility of a nuclear calamity” (IAEA).

According to Russian state media, an official with the Russian occupying authorities in Kherson who had been shot on Saturday passed away in the hospital after being taken there.

According to the story, Hura had been ambushed in the comfort of his own house and shot multiple times.

In June, another official who had been chosen by Moscow was found dead in the same district, reportedly from a bomb that had been hidden in his car.

There have been multiple reports of assassination attempts and assaults against pro-Kremlin leaders in Ukrainian territories that are controlled by Russia. These incidents have taken place in recent months.

In recent months, Russia has taken control of a significant portion of the Kherson region as well as a portion of the neighboring Zaporizhzhia region; however, Ukrainian forces have been successful in reclaiming some land.

During his speech on Saturday, Zelenskyy took aim at Amnesty International, arguing that the human rights organization has been hypocritical in its criticism of the Ukrainian military while remaining silent about Russia’s activities.

He continued by saying, “It’s a very eloquent silence, which brings out, once more, a manipulative selectivity of this organization.”

Amnesty International’s report, which was released on Thursday and accused the Ukrainian military of putting civilians in danger by creating camps in schools and hospitals and conducting counter attacks from densely populated regions, aroused widespread fury in the country of Ukraine.

In a show of protest, the head of Amnesty International’s office in Ukraine resigned from his position.

“And there are no words in any language that can explain this to someone who has not experienced this sorrow,” the speaker continued. “This is something that must be felt to be understood.”

Agnes Callamard, the Secretary General of Amnesty International, offered her condolences and praised her work before announcing her retirement. However, the organization maintains its stance on the study.

As part of a pact to prevent major food shortages, Ukrainian officials reported on Friday that three grain ships had departed the country. This followed the departure of the first grain ship in several weeks on Monday.

According to a statement released by the Joint Coordination Centre of the Black Sea Grain Initiative, which is the organization responsible for coordinating the operation that was agreed upon by Russia, Turkey, Ukraine, and the United Nations, another five cargo ships are scheduled to depart from the Ukrainian ports of Odessa and Chernomorsk on Sunday.