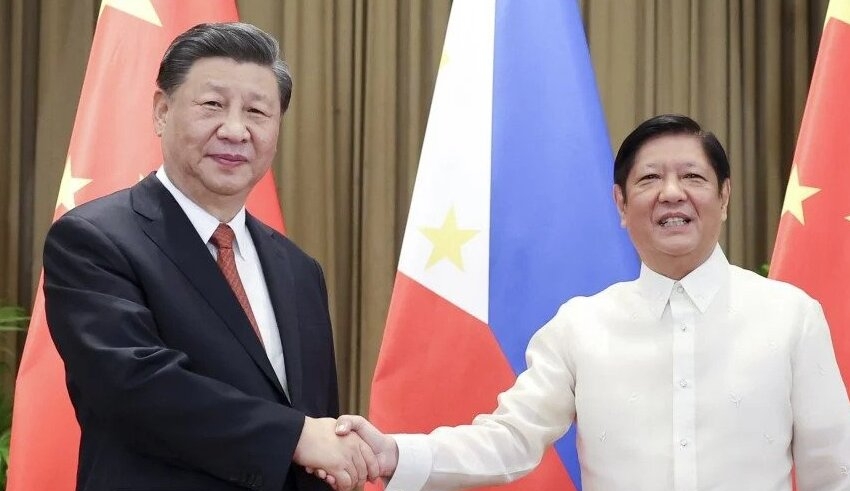 "The country of Philippines is prepared to engage in active negotiations with China to further the cooperative exploitation of marine oil and gas resources."
(c) South China Morning Post

During what Malacaang described as a “historic” bilateral encounter, Philippine President Ferdinand Marcos, Jr. and Chinese President Xi Jinping discussed a variety of topics, including the South China Sea.

Marcos and Xi met on the margins of the Asia-Pacific Economic Cooperation (APEC) Summit in Bangkok on November 17, late in the afternoon.

The Chinese Ministry of Foreign Affairs issued a statement hours after the one-on-one meeting stating that “the two sides must adhere to amicable consultation and address disagreements and conflicts appropriately.”

In a statement issued over 12 hours after the meeting, the Philippines’ Department of Foreign Affairs (DFA) stated, “the two presidents agreed that maritime concerns do not define the entirety of Philippines-China relations.” Marcos has stated the same thing in the past.

China said in its statement that the two nations should “work together to resist unilateralism and acts of bullying, to defend fairness and justice, and to maintain peace and stability in the region.”

China did not define the specific “acts of bullying,” although it has regularly referred to the United States as an aggressor. China is accused of bullying in the South China Sea, though.

During the bilateral meeting, the Philippine government stated that the two countries “reaffirmed their support for the early conclusion of a Code of Conduct on the South China Sea to help manage differences and regional tensions,” referring to the code that has yet to be agreed upon 20 years after ASEAN and China agreed to its creation.

The bilateral discussions between Marcos and Xi, as well as China’s participation in regional gatherings, coincide with the intensifying rivalry between the regional powerhouse and the United States.

A few days earlier, the Philippine President attended the ASEAN Summit in Phnom Penh, while Xi flew in from Bali, Indonesia, where he attended the G20 summit.

In a written statement for an APEC business summit, Xi warned against the Asia-Pacific region becoming “a battleground for great powers.”

Xi stated, “No attempt to fight a new cold war will ever be tolerated by the people or by our era.”

At the bilateral meeting, Marcos reaffirmed Xi’s earlier message. “Our foreign policy refuses to succumb to a Cold War mentality. Ours is an autonomous foreign policy guided by our national interest and dedication to peace, according to the Department of Foreign Affairs.”

This was the first time Marcos and Xi met as leaders of state.

According to a press statement and an interview with Marcos, the two leaders discussed “regional challenges” as well as “agricultural, energy, infrastructure, and people-to-people ties.”

According to a statement from China’s foreign ministry, Xi pledged to buy more quality agricultural and ancillary goods from the Philippines.

“The Philippines is prepared to engage in active negotiations with China to further the cooperative exploitation of marine oil and gas resources,” the statement added.

Marcos stated that they primarily discussed his forthcoming official visit to China in early January 2023, which will be his first state visit outside of Southeast Asia.

Before two leaders shake hands, the agenda for bilateral meetings, particularly those between the senior authorities of two countries, is typically determined.

Marcos had stated that he “hoped” to speak with Xi on territorial disputes in the West Philippine Sea or South China Sea.

The encounter between Marcos and Xi takes place during the new Philippine president’s first few months in office, a key period for establishing a positive first image with the world community.

Relations between the Philippines and China have fluctuated during the last three administrations. Links flourished under the administration of Gloria Macapagal Arroyo, froze under the late Benigno Aquino III, and grew again under Marcos’ immediate predecessor Rodrigo Duterte. Aquino is renowned as the leader of the Philippines who sued China over the West Philippine Sea.

Marcos appears committed to his foreign policy of “friend to all and foe to none.” He has unequivocally stated that he believes US-Philippine relations will and should be strengthened.

However, he has also worked to enhance relations with China. Arroyo, described by Chinese Foreign Minister Wang Yi as “an longtime and good friend of the Chinese people,” was a member of the Philippine panel for the bilateral meeting.