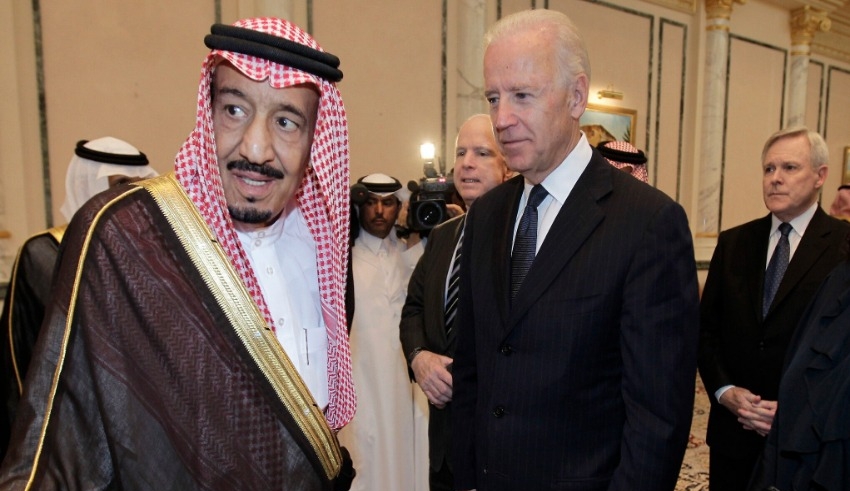 A visit to Saudi Arabia by Biden, who will be making his first regional trip since assuming office, was met with a resounding assurance of support for Israel.
(c) The Times of Israel

US: US President Joe Biden arrived in Israel on Wednesday (July 13) to begin a trip to the Middle East, where he and Israeli Prime Minister Benjamin Netanyahu pledged to strengthen Israel’s ties to the area as they prepare to take on Iran.

A visit to Saudi Arabia by Biden, who will be making his first regional trip since assuming office, was met with a resounding assurance of support for Israel, which has recently established links with numerous Arab states and aspires to do the same with Riyadh.

At Ben Gurion airport outside Tel Aviv, President Joe Biden stated, “We will continue to advance Israel’s integration into the region.” He also underlined Washington’s “bone deep” attachment to the Jewish state.

“In my opinion, our relationship with Israel is stronger and deeper than ever before. We’re enhancing our ties even more with this visit,” added the president.

“We will explore constructing a new security and economic architecture with the nations of the Middle East,” Israeli interim prime minister Yair Lapid said, following US-brokered agreements in 2020 with the UAE, Bahrain, and Morocco.

Meanwhile, Western countries continue to try and save the 2015 nuclear deal by renewing their powerful global coalition to block Iran’s nuclear development.

After calling Saudi Arabia’s oil-rich nation a “pariah” following the death of dissident Saudi journalist Jamal Khashoggi in 2018, Biden’s Friday visit to Saudi Arabia will be the main focus of the tour.

A re-engagement with a long-time vital US strategic partner and major energy supplier is regarded as part of efforts to stabilize oil markets rocked by the crisis in Ukraine.

As part of attempts to strengthen ties between Israel and Saudi Arabia, Air Force One will conduct its first direct flight from Israel to Saudi Arabia.

As soon as Biden landed, the Israeli military showed him their new Iron Beam defense system, an anti-drone laser they claim is essential to confront Iran’s fleet of unmanned aerial vehicles.

Despite Israel’s adamant insistence that it will do all it takes to stop Iran’s nuclear ambitions, the 2015 deal that relieved Tehran of sanctions is still opposed by the country.

The Iranian president had earlier cautioned that if Biden’s purpose on the trip was to strengthen Israel’s security, his “efforts will not generate security for the Zionists in any manner.”

In Jerusalem, President Biden visited the Yad Vashem Holocaust memorial, where he spoke with Holocaust survivors and inscribed a message that read: “We must never, ever forget because evil is never defeated,” following the Israeli military’s display.

There are 1,000 Israeli flags flying over the city of Jerusalem to welcome President Trump, who has not revoked his controversial decision to recognize Jerusalem as the capital of the Jewish state.

President Joe Biden has been to the Middle East several times before, most recently when he was elected to the Senate in 1973.

In the lead-up to his trip, Palestinians accused Biden of failing to fulfill his promise to reestablish the United States’ role as an honest mediator in the conflict over Israel-annexed east Jerusalem.

Biden reiterated his support for Palestinian statehood in airport talks to Israeli leaders.

For both Israelis and Palestinians, he asserted, the two-state solution is the “greatest approach to assure” prosperity in the future.

However, there are no hopes of a new US peace drive as Israel prepares to vote in its fifth election in less than four years on November 1.

The shooting of Al Jazeera reporter Shireen Abu Akleh in May while she was documenting an Israeli army raid in the West Bank has strained relations between the United States and the Palestinians.

The Palestinian-American journalist’s death was determined to be the result of Israeli gunfire by the United Nations. Despite Washington’s acceptance of this as a possibility, the government still maintains that there is no proof the assassination was premeditated.

When asked by AFP whether the family of Abu Akleh had received a response to their request to meet with US authorities in Jerusalem, Lina Abu Akleh, the family’s representative, said that US Secretary of State Antony Blinken, who is accompanying Biden, had extended the invitation on Wednesday.