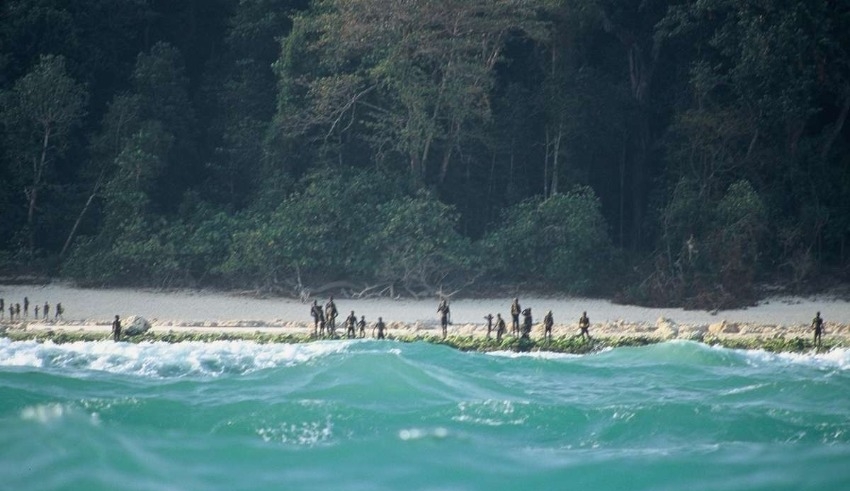 One of the most dangerous places on earth is the isolated North Sentinel Island, and those who have made it their home want to see that it stays that way.
(c) Survival International

One of the places on earth with the least amount of human interaction is North Sentinel Island. And those who have made it their home want to see that it stays that way. There is a good reason why the island’s verdant swaths of approximately 60 square kilometers, which are tucked away west of the Labyrinth Islands in the southern Andamans, have been kept hidden from the rest of the world.

It has been called “the most difficult spot in the world to visit,” or “the world’s most perilous island,” and the location of “the most secluded tribe in the world.” All of these descriptions are accurate. It is against the law for Indian residents to travel to North Sentinel or establish any kind of contact with the Sentinelese people, who make up one of the few Stone Age tribal populations that can still be found living here. The Sentinelese, who have lived in seclusion for hundreds of years, are known to viciously attack anyone who even attempts to pay the remote island a visit.

The island is located in the middle of the Indian Ocean and is surrounded by beaches, dense forest covers, and crystal clear waterways. It is home to between fifty and one hundred Sentinelese people who, according to anthropologists, have been living in isolation for more than sixty thousand years. The tribe is furiously dangerous and fiercely autonomous at the same time.

The majority of the time that is known about these hunter-gatherer dwellers, they have avoided contact with people from other cultures. In the year 1896, a convict who had escaped from an Indian reservation and washed up on their shore was murdered by stabbing. In 1974, they launched a barrage of arrows at a film team and attacked them.

During the aftermath of the earthquake that struck the region in 2004, an Indian Coast Guard helicopter was attacked with arrows as it flew over the area to look for signs of survival and drop off packages of food. In 2006, two fishermen who wandered into their waters were slain, and the chopper that was deployed to retrieve the bodies was received by the Sentinelese with weapons in their hands. The fishermen’s bodies were never recovered.

The most recent incident was when John Allen Chau, an American adventure blogger and evangelical missionary, was brutally killed by the tribespeople in 2018 when he tried to illegally enter the island in order to teach them about Christianity. This is probably also the incident that made the most sensational headlines. On the other hand, it’s not as though there have never been any productive encounters in the past.

Late in the 20th century, the Indian government made an attempt to negotiate with the Sentinelese people, but the Sentinelese responded with a barrage of projectiles launched from the shoreline. Even though most of the expeditions were fruitless, there were two significant encounters in the early 1990s when the Sentinelese accepted coconuts from a team that included anthropologists from India’s Anthropological Survey (AnSI).

In addition to Madhumala Chattopadhyay, who was the first female anthropologist to make contact with the Sentinelese, the group was led by Triloknath Pandit, also known as T N Pandit, who was at the time the director of the Anthropological Survey of India. Triloknath Pandit was also known as T N Pandit. However, the gathering did not progress to anything beneficial and informative as it was intended to do so.

The Sentinelese, however, have their own reasons for refusing any and all attempts to make contact with them. In the year 1880, a British navy officer named Maurice Vidal Portman abducted six native islanders and brought them to the city of Port Blair with the intention of “civilizing” them. They had no immunity to modern diseases, so they became ill as soon as they were exposed to them. Two of them passed away, and the other four, who were all children at the time, were dumped back with gifts to make amends and presumably more diseases that have not yet been diagnosed. There is little question that Portman bears a significant amount of responsibility for the resentment that the tribe feels toward outsiders.

1997 marked the year when North Sentinel Island became formally off-limits to any visitors from the outside world. They are a very fragile community, and things such as contemporary diseases and tourism booms in the neighboring Andamans and Nicobar Islands pose enormous risks to them. The Sentinelese don’t wish to interact with the rest of the world in any way, shape, or form. And it’s likely that doing so is the most effective approach to keep them out of harm’s path.