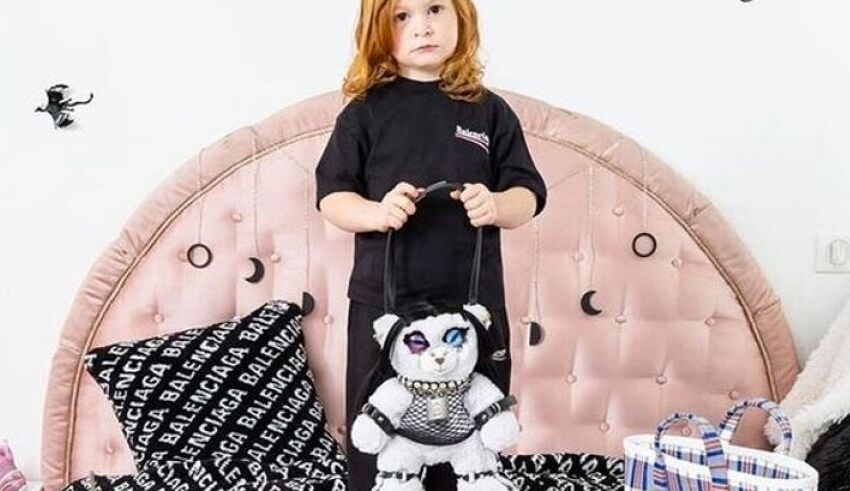 In response to the backlash over its contentious advertising campaigns featuring children, Balenciaga has issued a statement "strongly condemning child abuse"
(c) euronews

Even though Balenciaga has quit Twitter, the site’s users continue to analyze the luxury brand’s every move.

On November 21, June Nicole Lapine, better known as @shoe0nhead, took to Elon Musk’s Twitter to indicate that the luxury fashion label is plotting to exploit youngsters. The YouTuber’s rationale made the claim even more absurd.

While some have complained to Balenciaga’s decision to place BDSM-inspired handbags in the hands of young children, the campaign is hardly indicative of a larger conspiracy.

Nonetheless, Lapine bolsters her argument by incorrectly associating the images with photographs from a totally other — and I repeat, entirely separate — campaign touting Balenciaga’s cooperation with adidas.

Said images depict the Three Stripes purse atop a stack of extremely official-looking documents. Zooming in reveals that one of these documents is a statement from United States v. Williams, a Supreme Court decision that affirmed the PROTECT Act, a federal law that criminalizes the advertising, promotion, presentation, and distribution of child pornography.

She then cites Balenciaga’s deleted Instagram account as further evidence of the brand’s alleged culpability. Anyone who follows the corporation is aware that it periodically deletes its feed and replaces it with its most recent release.

Just before Lapine’s conspiratorial tweets went viral on November 21, Balenciaga updated its official Instagram with new images of its Spring 2023 Garde-Robe line, which was made available for pre-order that morning.

Some passionate conspiracy theorists began commenting on Balenciaga’s most recent posts with references to Lapine’s assertions, which have subsequently received tens of thousands of likes and retweets.

On November 22, Balenciaga disabled comments on their Instagram profile and published an Instagram Story apologizing for its Christmas gifting initiative.

“Our plush bear backpacks should not have been paired with children in this advertisement,” stated the statement. “We have withdrawn the campaign instantly from all platforms.”

Two hours later, Balenciaga posted a follow-up Story addressing the court paperwork seen peeking out from behind the adidas bag. This rapid response may have been spurred by the Kanye issue that the brand had just recently avoided a month previous.

The statement clarified, “We are pursuing legal action against the companies responsible for building the set and inserting unapproved goods for our Spring 23 marketing photoshoot. We advocate for the safety and well-being of children.”

The firm followed through with its vow on November 28 by filing a $25 million lawsuit against production company North Six, Inc. and set designer Nicholas Des Jardins, who directed Balenciaga’s adidas campaign (the one containing those bizarre court documents).

Balenciaga asserts that the defendants “included certain documents in the campaign pictures” without permission, causing “the general public, including the news media,” to “falsely and horrifyingly” connect the brand with child abuse.

Balenciaga has not filed a lawsuit against the companies involved in the production of their Christmas giving campaign involving young models.

Balenciaga filed action against North Six and Des Jardins on the same day it issued a second public statement on Instagram.

In this statement, Balenciaga reaffirmed its prior apologies and pledged to “laid the groundwork with organizations that specialize in child protection and aspire to end child abuse and exploitation.”

The legal remedy has not, however, quelled the QAnon-ian idea that Balenciaga (the world’s first deep state fashion brand!) is involved in some sort of child abuse ring, a lurid conspiracy theory for which social media reactionaries provide no evidence.

Even if the claim may be completely untrue, it sounds terrible enough for Tucker Carlson’s notoriously fact-free prime-time show to discuss it. Consequently, fear-mongering tweets continue to pour in, ranging from the Pinault family (who own Balenciaga parent company Kering) to infrequent Balenciaga stylist Lotta Volkova.