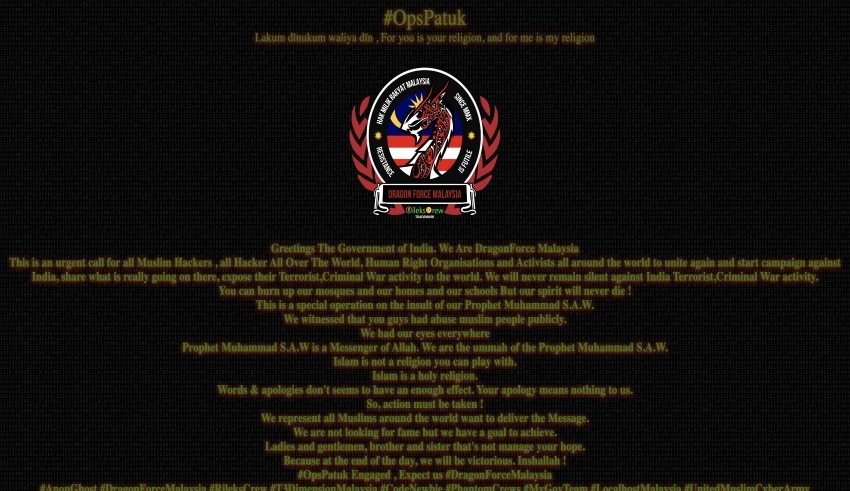 Malaysia – As part of a hacking campaign against India following an anti-Islam remark by a lawmaker from the governing party, a group calling itself DragonForce Malaysia claimed to have successfully damaged the websites of Delhi University and the Nanded-Waghala City Municipal Corporation.

The activist organization demonstrated its ability to insert pages into the websites of an Indian institution and a local council to express its opposition to the politician’s statements regarding Prophet Muhammad on its Twitter feed.

“Another government and university in India has been hacked and leaked by Dragonforce Malaysia. On Twitter, the group stated, “Database Incoming Boom Boom Boom.”

Visits to the listed websites revealed that they had been replaced with a message from DragonForce Malaysia on its Ops Patuk campaign against Indian websites for using a religious insult.

On Twitter, the organization also said that it had been able to inject malicious code into some of the websites.

The Malaysian group’s assaults were only the latest. The organization previously claimed responsibility for defacing 70 government and private websites in India, leaving audio samples and words reading, “For you is your faith, for me is my religion,” according to the Times of India.

The assault apparently targeted a wide variety of Indian websites, including the Indian Embassy in Israel and the National Institute of Agriculture Extension Management, as well as Delhi Public School and other academic institutions’ websites.

The campaign was started on the group’s website’s forums. Members who successfully defaced websites started new postings on the forums, outlining which sites they defaced and included screenshots of the hacked sites.

Nupur Sharma, a spokeswoman for the Bharatiya Janata Party (BJP), sparked a global uproar earlier this month when she made statements disparaging Prophet Muhammad, prompting official diplomatic objections from Muslim nations across the globe, including Malaysia, against the Indian government.

This caused the Modi government to undertake damage management by dismissing her remarks as her personal view.

Protests have erupted throughout the globe as a result of the debate, including fatal riots in India.