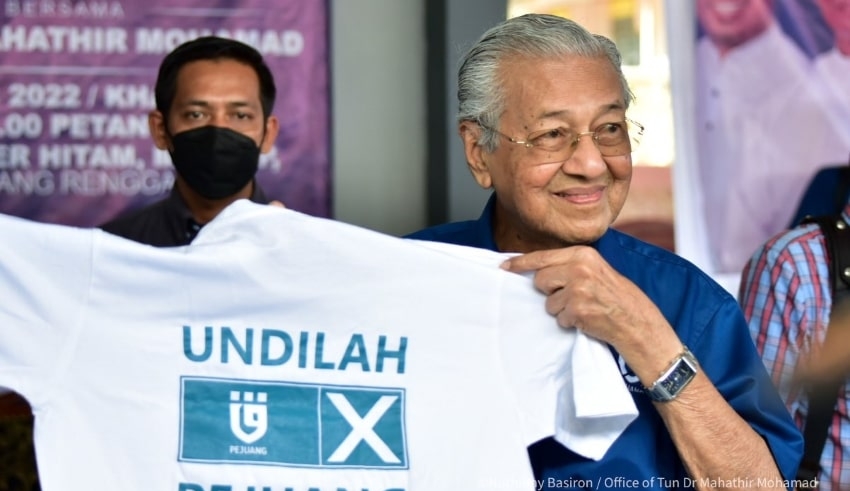 “I’m disturbed by Najib’s allegation in the Dewan Rakyat that the government hasn’t paid anything for the 1MDB debt.

“Najib is a remarkable individual. He has the audacity to reply, ‘What is there to be embarrassed of?’ when you become a thief and are sentenced to 12 years in jail by the court.

“If any of us are unafraid to perform such things, then our civilization is doomed,” he addressed a crowd gathered at Felda Ayer Hitam for his ceramah.

In response to Najib’s well-known phrase “Malu apa bossku?” the elderly politician went so far as to remark that if he were to streak in public, he would react coyly and shamelessly as well. (Do you have anything to be embarrassed of, boss?)

DAP youth leader: Zahid could be the 10th Prime Minister if BN wins the Johor election

Dr Mahathir, who was just released from the National Heart Institute (IJN) after having an elective operation on January 9, made his first campaign appearance as chairman of the Parti Pejuang Tanah Air (Pejuang) for the Johor elections.

The Langkawi MP emphasized the significance of a new state government free of corruption in contrast to the “kleptocratic” Barisan Nasional (BN) administration, which he said was still collaborating with Najib, in his ceramah.

Najib, who was convicted on numerous counts of corruption and abuse of authority in connection with cash embezzled from SRC International totaling over RM40 million, stated in Parliament that no public funds were used to service 1MDB’s principle debt.

He said that Goldman Sachs, audit companies KPMG and Deloitte, AmBank, and the US Department of Justice would have provided the majority of the monies to pay the loan (DoJ).

Some of the RM23 billion in cash embezzled from the corporation were returned to Malaysia by these entities. 1MDB has a subsidiary called SRC International.

According to the Malaysian Finance Ministry, the Malaysian government has returned RM13.3 billion of 1MDB’s debt so far, with RM38.81 billion remaining owed as of December 31 last year.