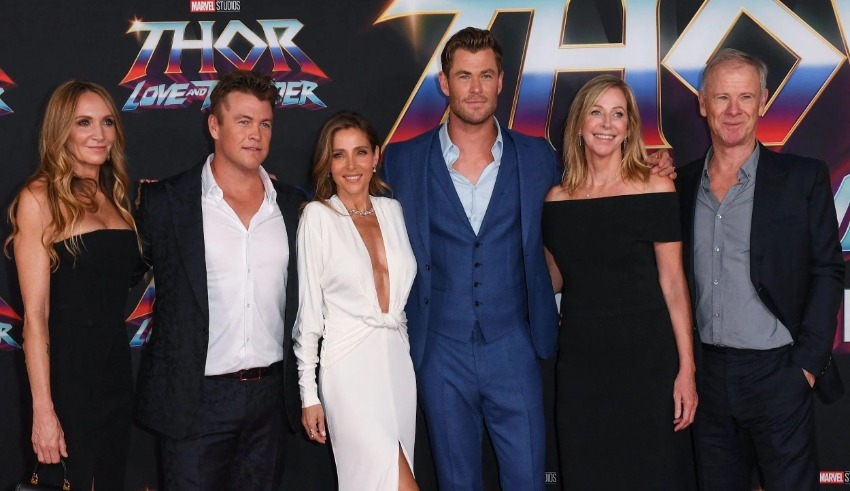 Filmmaker Waititi returns to co-direct the film along with Hemsworth, who deserves credit for turning Thor from a somber persona to one full of laughs.
(c) FMV6

US: When Thor: Ragnarok came out in 2017, he had to deal with his brothers and sisters, his planet’s impending annihilation, a booze-fueled sidekick, a gigantic dog and the death of his father.

A Taika Waititi film is at its most intense when it has everything: slow-motion strolling, stupid antlered headdresses, sword fighting and laser cannons, capes and zombie soldiers, a hair-cropped Thor, a typically unbalanced Jeff Goldblum character, a prophecy, alien spaceships, and lots of Led Zeppelin.

Compared to its predecessor, its sequel is a veritable fruit basket of a film.

This time around, filmmaker Taika Waititi returns to co-write and co-direct the film along with Chris Hemsworth, who deserves more credit for turning Thor from a somber character to one full of laughs. It’s impossible not to like him when he drastically mispronounces superhero-related words and then turns into a goofy. In addition, Valkyrie and Sif, Tessa Thompson and Jaimie Alexander, are back in the cast.

Jane Foster, Thor’s ex-girlfriend who skipped the third film because she didn’t want him to see her again, is one of the troublesome characters that has returned. Foster, represented by Portman, now wields Mjolnir, the legendary magical hammer of Thor, and is known as the Mighty Thor. For her next catchphrase, she’s thinking of something along the lines of “Eat this hammer!”

Although Thor hasn’t changed his affections for the woman he used to be infatuated with, his favorite weapons have. Stormbreaker, the enchanted axe, is now in his hands. He appears to have no interest in Mjolnir – but is he? “Are we all right?” His ex-weapon asks, “I realize it’s a little awkward having my ex-weapon around,” in an amusingly insane sequence, which basically depicts a Norse god’s love triangle with two metal weapons.

Christian Bale stars as Gorr the God Butcher in this installment, and he’s a real standout. An atheist who formerly prayed in vain to the gods has changed his mind after suffering a personal defeat and now intends to exterminate them. Bale’s hate is so ferocious that you can practically taste it in your popcorn. “God will use you, but help you they will not,” he says with an acrimonious growl.

Russell Crowe’s portrayal of Zeus as a vainglorious despot with a Roman attire (a riff on Gladiator?) and a terrible Mediterranean accent adds another odd twist to the film. To the delight of many in the crowd, Zeus is accompanied by lackeys (some of whom he calls Zeusettes) and constantly irritates and humiliates Thor. The Viking tells the boy, “You know what they say: Never meet your heroes.”

Jennifer Kaytin Robinson and Waititi are both credited with a script that seems like it was put together by gerbils after they ripped up a bag of words. You move from an Earth-based hospital room with a terminal illness to a low-gravity shadow dimension where Thor is dressed as a hot dog and the movie is in black and white. The film’s lack of coherence and fragile linkages between scenes gives the impression that nothing is being built up.

Among the gods’ favorite haunts is Omnipotence City, where madness reaches its zenith. Bao, the God of Dumplings, is one of many deities in the Aztec, Maori, and Mayan religions. A Mel Brooks joke, it appears, but given the trajectory of the MCU, don’t be surprised if the 47th picture is titled “Bao: Steam And Sauce.”

Many of the characters from Ragnarok make cameo appearances in the film, including Hemsworth’s wife and one of his children, a group of disgruntled Guardians of the Galaxy and Cate Blanchett, a well-known comedian impersonating Cate Blanchett’s character.