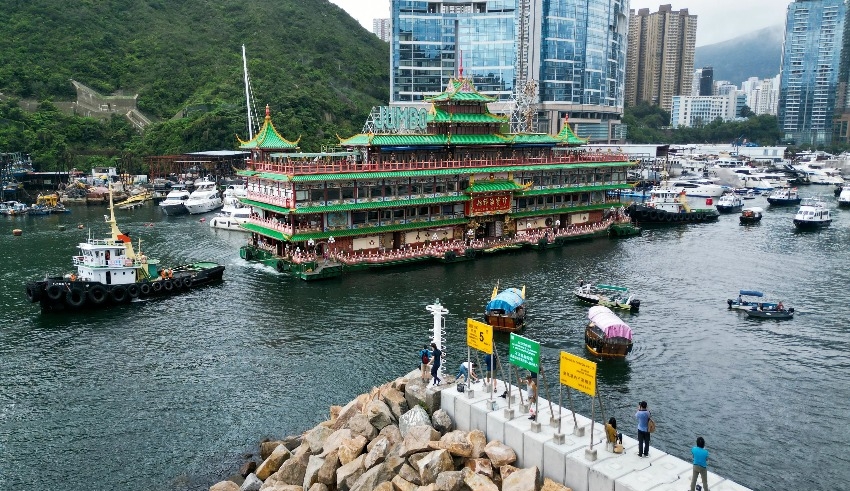 SINGAPORE: A statement from Hong Kong’s Jumbo Floating Restaurant’s parent business on Sunday stated that it will not get any insurance compensation for the loss of the vessel (Jun 26).

According to Aberdeen Restaurant Enterprises, in compliance with maritime rules, the vessel has a ‘Protection and Indemnity Cover for Third Parties Liability’ losses to third parties, not to the business, and they’re are covered by this policy.

After it “encountered severe weather” and began to take on water, it capsized near the Paracel Islands in the South China Sea on June 19th, according to the business.

Some people, however, are skeptical of the incident involving the tourist attraction, which closed in March 2020 after nearly a decade of financial difficulties.

On Sunday, the ship’s departure was in accordance with maritime norms and standards, according to the firm

Before the vessel left Hong Kong, the Company recruited competent maritime engineers to evaluate the hull and hoardings and gained approval from the authorities.

Towed out of Hong Kong by a licensed third-party broker, a tug firm. Towing was performed in accordance with accepted nautical standards and customs around the world.

Moreover, the company stated that it has filed its report to authorities in compliance with the appropriate laws.

In accordance with Hong Kong’s regulatory obligations, it filed a Report of Marine Occurrence three days after issuing a statement about the incident, on June 20, while compiling one.

Following the vessel arrives at its next port, it is required to file an incident report “as soon as practical but no later than 24 hours after such vessel’s arrival at the next port,” according to Hong Kong’s relevant rules.

Concerns over whether or not the ship had sunk have also been raised.

While the vessel had been described as “capsized” in the company’s initial announcement on June 20, it had also stated that the water level at the area was “beyond 1,000m,” making salvage efforts extremely challenging.

Later, the firm contacted a few media sites and insisted that the boat had “capsized” rather than “sunk.”

After the incident occurred, the firm declared it had been “constant” in its response.

To use a Chinese name for the Paracel Islands, “our statement on June 20 claimed that water had entered the hull of the vessel and the vessel began to tilt when transiting the South China Seas,” it added.

The tugboat was unable to save the ship, despite its best attempts. As we reported to the marine department on June 23, we said that the vessel had capsized owing to unfavorable weather conditions.

As a precautionary measure, the tugboat will stay “near the vessel in the Xisha Islands,” according to the business.

“The Sansha Maritime Safety Administration has been informed and is currently assessing the required measures,” it said.

In its heyday, it was the pinnacle of opulence, with a construction cost of more than HK$30 million (US$3.8 million), making it one of the most expensive casinos in the world. A total of 2,300 people might be accommodated on board the 76-meter yacht.

The restaurant, designed to resemble an imperial palace in China, formerly drew everyone from Queen Elizabeth II to Tom Cruise.

Several movies, like Steven Soderbergh’s Contagion, portraying a terrible global pandemic, used it as a plot device as well.