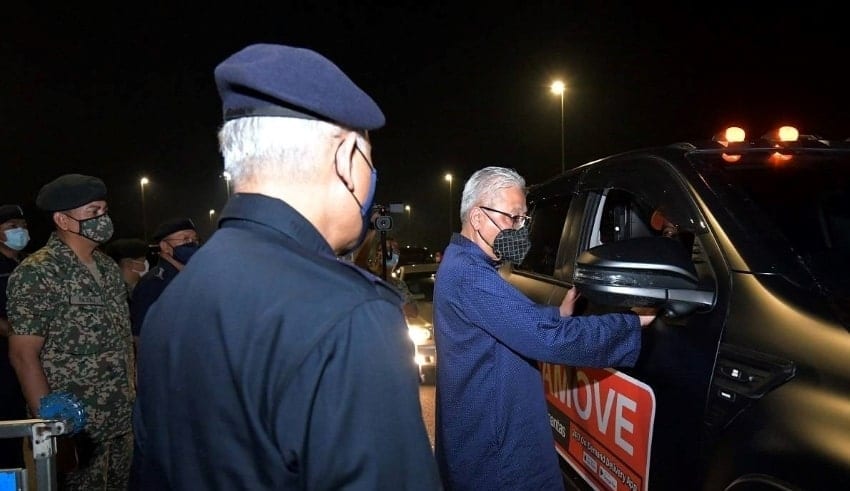 The Defense Ministry secretary-general Datuk Seri Muez Abd Aziz and Chief of Defense Forces Gen Tan Sri Affendi Buang are also present during the visit The Royal Malaysia Police (PDRM) has announced that as the falsification of documents are getting more rampant, they will be improving the interstate application system in order to prevent it from happening in the future.

Without giving any more details about the system upgrade, Datuk Seri Acryl Sani Abdullah Sani who is the current Inspector-General of police has stated that the reason for this is due to the discovered various schemes by the police with regards to counterfeiting cross state documents since implementation of the movement control order (MCO) that happened this month.

He also mentioned that the discovered tactics used by the perpetrators would not be that easy to avoid since more people are now looking for ways in order to get over the existing interstate system.

During his visit with Senior Defense Minister Datuk Seri Ismail Sabri Yaakob at the USJ Subang toll plaza to meet with the roadblock personnel, he told the reporters that the police will continue to find ways in order to upgrade the system such that these tactics of falsifying interstate documents would be put under control. He also added that it is common for the people to fake documents like this especially with the current circumstances but he assured that the PDRM will tighten up these loopholes.

He said that in comment to the tactics made by the people to falsify interstate documents during the current MCO.

Given that, he said the PDRM has currently turned down about 2,730 interstate applications due to giving unreasonable excuses for interstate travel.

Meanwhile, Ismail Sabri who was also present during the visit has urged the public to follow the MCO and to not attempt crossing states and districts.

He said that as he made a visit to the roadblocks set up located at Eco Majestic toll plaza and at USJ Subang toll plaza, he found that there were not many vehicles during the Aidilfitri night, just as he was expecting which indicates that people have been staying at home. He also expressed his hopes for the situation to reflect that the public has been complying with the government issued orders.