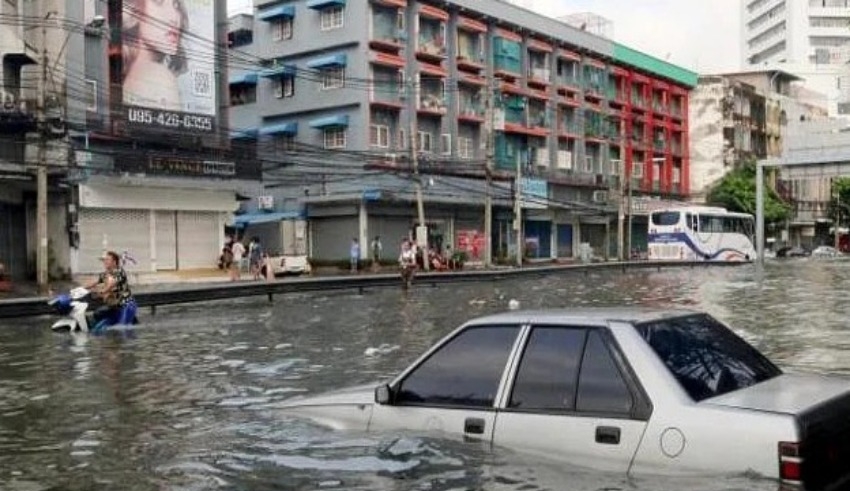 Thai Cabinet approved a budget of a total of 912 million Thai baht that has been put aside for the management of water resources during the dry and wet seasons.
(c) The Straits Times

The biggest rains that Bangkok has seen in nearly two decades are bringing its canals dangerously close to overflowing. The torrential rains began on Tuesday evening and quickly filled up the canals. Since Tuesday, the Bang Khen district has received 170 millimeters of rain, which Governor Chadchart Sittipunt said is the biggest amount of precipitation recorded there in the past 20 years.

The water levels in the Klong Lat Phrao and Kong Prem Prachakon canals have risen to the point that they are likely to cause catastrophic floods. Flooding has occurred throughout the Bang Khen roundabout as well as the areas surrounding the new electric train route lines. The governor has suggested that the additional tracks may be to blame for some of the flooding since they slow drainage.

According to him, the government is using all of its efforts to remove the floodwaters from the roadways; nevertheless, the high water levels in the canals are making this endeavor difficult. Chardchart is advising drivers to arrange their trips around the weather since, according to him, poor planning is the reason why so many drivers have become stranded in flooded areas.

Because there were so many automobiles stranded in these places, even the military trucks that were sent to assist flood victims were unable to get there in time. These are the lessons that have been learnt, and moving forward, we want to improve [our reaction].

Residents in Bang Khen, Lat Phrao, Don Muang, and Chatuchak have been warned by the governor to remain vigilant in light of the impending arrival of additional heavy rain.

Yesterday around 8:45 in the evening, Bangkok Governor Chadchart Sittipunt went live on Facebook to show the flooding that was occurring in the Bang Khen district. From the Wat Phra Sri Mahathat BTS Station, Chadchart made his way on foot to the flooded region in order to offer assistance to others who were stranded there.

In an effort to assist in getting stranded automobiles through the floodwaters, Governor Chadchart waded into the water up to his knees while wearing a brilliant yellow jacket.

Last night, Minister of Defense Prayut Chan-o-cha gave the order for all military forces in Bangkok to distribute water pumps, assist with draining flood water, and provide assistance to victims of the flood in Bangkok and the surrounding area. These orders were given by the Minister of Defense.

The hashtag #flood is being used by members of the public on Twitter to provide photographs, videos, and updates related to the recent flooding.

According to the projections of the Thai Meteorological Department, intense downpours and brief flash floods are going to persist across the entirety of Thailand until Friday.

In the meantime, the Thai Cabinet approved a budget of a total of 912 million Thai baht that has been put aside for the management of water resources during the dry and wet seasons, and another 664 million Thai baht has been allotted for the installation of new water pumps.