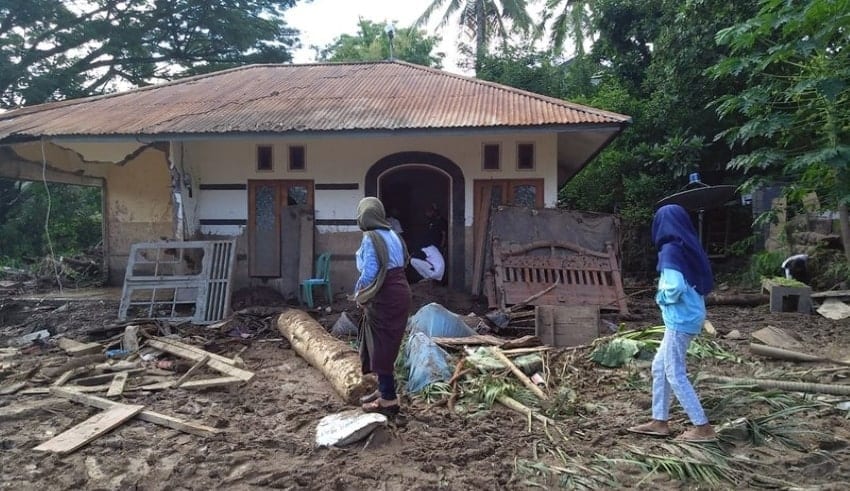 Rescuers expect more death tolls as the effect of a tropical cyclone that killed not less than 128 people.
(C) app

Rescuers expect more death tolls as the effect of a tropical cyclone that killed not less than 128 people. They are now searching on the isolated areas of southeast Indonesia to look for the missing people.

Helicopters were sent recently to help seek for survivors among 72 reported lost individuals so far within the East Nusa Tenggara islands, where tropical cyclone Seroja brought strong winds and overwhelming downpours that led to flash floods and landslides.

A local official of Tanhung Batu Village where Mount Ile Lewotolok volcano is located has taken a video where fallen trees and massive sizes of cold magma rocks had hit houses after being knocked over by the cyclone.

Pictures taken in the area reveals knocked down trees, rough waters and wooden houses that are wiped out due to the violent storm. Authorities are saying that casualties will increase as rescuers reach confined zones.

About 8,424 people were dislodged, almost 2,000 buildings, counting in the hospitals and houses are destructed by cyclone Seroja which is now heading to northern Australia.

Dwikorita Karnawati, the head of the weather agency said that the reason why tropical cyclones which used to be rare in Indonesia are occurring more frequently right now is related to the climate change.

She said in a news conference that cyclones like Seroja, hitting the land which resulted to colossal damage is rare in itself.

Authorities said that two had died near the province of West Nusa Tenggara whereas, atleast 27 people lost their lives in Timor Leste, a neighboring country.

It is possible that the other Lemabata Island residents have been washed away into the sea. Deputy head Thomas Ola Langoday, trusted that aid was on the way.

Langoday feared many bodies were still buried under large rocks.

President Joko Widodo held a Cabinet meeting yesterday to speed up evacuation and relief efforts and the restoration of power. Considering the difficulty of giving help to the people due to the extreme weather conditions, the president requested to quickly open sea and air accesses if land transportation is not possible.