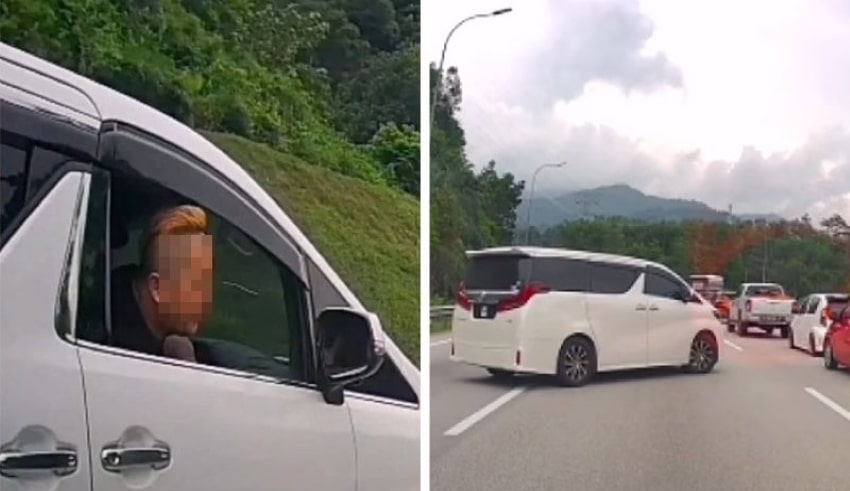 The reckless driver caught on camera driving his Toyota Alphard (MPV) dangerously at the Karak Highway has been remanded for three-days.
(C) Focusmalaysia

Malaysia – The reckless driver caught on camera driving his Toyota Alphard (MPV) dangerously at the Karak Highway has been remanded for three-days.

Police have arrested the driver of a white Toyota Alphard who was videoed zipping recklessly between cars on the Karak Highway yesterday amid the “balik kampung” exodus for Hari Raya Puasa.

“The suspect has been remanded for three days for further investigations.  The case has been classified as driving recklessly and dangerously under Section 42(1) of the Road Transport Act 1987,” Gombak district police chief ACP Zainal Mohamed Mohamed said, in a statement.

Two days ago, a dashcam footage went viral showing the driver driving dangerously between KM25.1 and KM27.5 of the Karak Highway, endangering other motorists.
In a statement on Sunday (May 1), Gombak police chief ACP Zainal Mohamed Mohamed said the incident occurred along the Karak Highway heading towards Genting Sempah.

“Dashcam footage showed the suspect cutting off motorists and constantly braking his vehicle in attempts to provoke them.

“A background check also found that the vehicle had 56 outstanding traffic summonses,” he said.

He added that a police report was made while efforts to identify the suspect were underway.

The dashcam owner was also urged to give a statement at the Gombak police station. Apart from overtaking vehicles using the emergency lane, the 43-year-old man was also seen hitting the brakes of his vehicle numerous times for no reason, suspected to be an attempt to provoke other drivers.