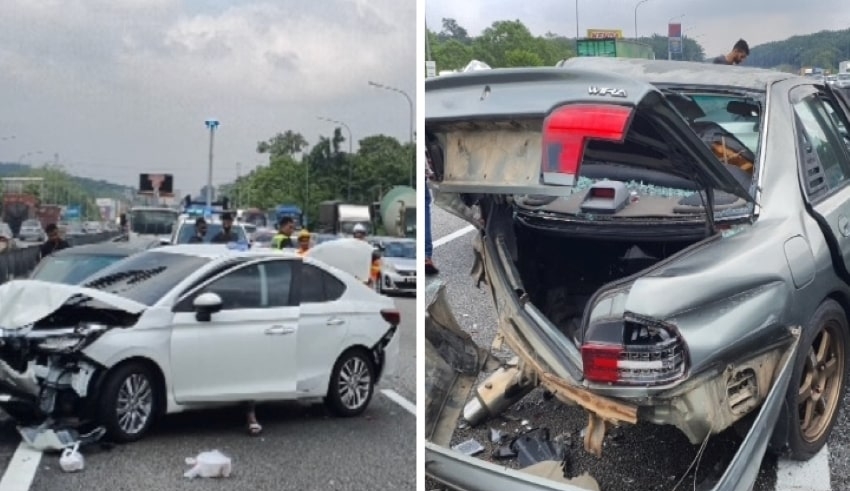 Congestion on the North-South Highway in Negeri Sembilan has been caused by an accident that involved seven cars and occurred near Kilometer 271.1.
(C) therakyatpost.

Malaysia – Congestion on the North-South Highway in Negeri Sembilan has been caused by an accident that involved seven cars and occurred near Kilometer 271.1.

Superintendent Mohd Fazley Ab Rahman, who is in charge of the Nilai District Police, said that the accident that took place on Tuesday at 1:40 p.m. was caused when a Toyota Vios hit a BMW from behind that had stopped owing to heavy traffic.

After being struck by a Mercedes, the Toyota Vios was followed by four other vehicles, all of which crashed with each other in a “bumper to bumper” manner.

“Fortunately, the collision resulted in no injuries to any of the parties involved, and the only damage was sustained by the vehicles.” says Superintendent Mohd. Fazley Ab Rahman

According to Mohd. Fazley, there was traffic congestion for around seven kilometers as a direct result of the collision.

At 4.30 in the afternoon, regular traffic conditions were restored after personnel of the Highway Patrol, the Royal Malaysian Police (PDRM), and roadway concessionaires worked together to handle the situation and restore order to the highway.

The incident is being reviewed in accordance with Rule 10 LN 166/59 of the Traffic Rules 1959, and further investigations are presently currently being carried out.

What are the most common factors that lead to accidents on the road?

Some of the things that cause accidents are not paying attention, driving recklessly, not having enough safeguards, speeding, bad habits, social and behavioral misconduct, and drivers of larger vehicles who are inconsiderate of other drivers.

How can we prevent these accidents?

1. Get the right attitude about driving.

2. Get as much driving practice as you can while being supervised.. 3.

4. Underage drinking and drug use are illegal.

7. Start out slowly and safely.

8. Prepare yourself for poor weather conditions.

Accident prevention is important because it will decrease the number of people who get injury, illness and deaths.

Netizens are doing their part by spreading the word on social media about how to stay safe on the road.