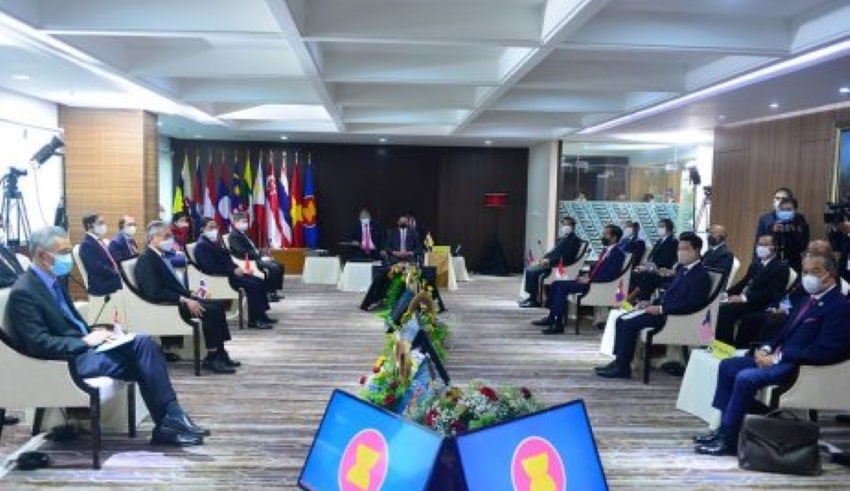 Japanese Foreign Minister Motegi Toshimitsu told his counterparts in the Association of Southeast Asian Nations (ASEAN) that it would be good to “meet face to face” again after more than a year of diplomacy-via-Zoom.
(C) thediplomat

Japanese Foreign Minister Motegi Toshimitsu  told his counterparts in the Association of Southeast Asian Nations (ASEAN) that it would be good to “meet face to face” again after more than a year of diplomacy-via-Zoom.

Instead, ASEAN has granted this privilege to China, twice: first in Fujian province and again in Chongqing, just weeks apart. It is no surprise that Southeast Asian countries would wish to speak with China. Despite the pandemic, ASEAN’s volume of trade with China increased to an all-time high of $731.9 billion (excluding services), and China will likely play a central role in the region’s recovery from the COVID-19 pandemic.

China’s decision to host the foreign ministers of the 10 ASEAN member states in Chongqing was also important in that it was attended by Wunna Maung Lwin, the foreign minister of the military junta led by Sen. Gen. Min Aung Hlaing that came to power in a coup in February.

To many, this amounted to a de facto recognition of the military takeover, and a tacit endorsement of the violent measures – the military has killed at least 880 people since February – that it has taken to quash the widespread public opposition to the coup.

Whether or not the member states of ASEAN are aware, the fact is that Myanmar’s democratic transition in 2011, and its sudden collapse into military dictatorship, has brought increasing Western scrutiny on the country, which is nestled strategically between India and China. For instance, at last month’s G7 meeting in Cornwall, England, the crisis in Myanmar, and the global retreat of liberal values more generally, was near the top of its agenda.

To fend off the further rise of authoritarian powers with revisionist aims, whether China or Russia, U.S. President Joe Biden and British Prime Minister Boris Johnson announced that democratic powers should hold true to their values.