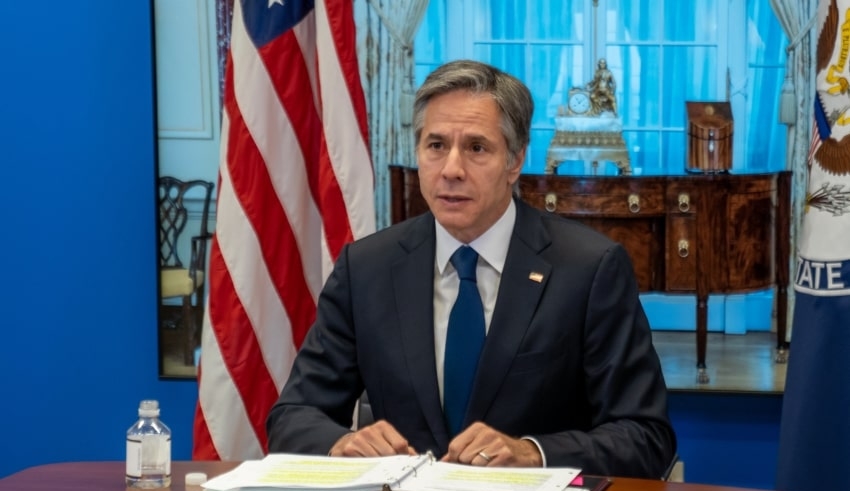 Secretary of State Antony Blinken said that the United States has turned down China’s unlawful maritime claims on the South China Sea and is siding with the Southeast Asian nations in standing against China’s oppression.
(C) SecBlinken

Secretary of State Antony Blinken said that the United States has turned down China’s unlawful maritime claims on the South China Sea and is siding with the Southeast Asian nations in standing against China’s oppression.

In a video conference address, he told the foreign ministers of the Association of Southeast Nations (ASEAN) that the United States is troubled with the current situation in Myanmar and have asked the association to take proper measures and address the violence happening in the country and restore its democracy.

After Biden’s administration took office since January, the meeting with the ASEAN is the first which came due to the deep concerns among the diplomats and others as Washington has not been providing sufficient attention to a region that is crucial to its regional strategy to counter an increasingly powerful China.

ASEAN has been heading the main diplomatic effort on Myanmar which is part of the bloc as the coup that transpired since Feb 1 has placed the country under turmoil.

Myanmar’s junta leader does not seem to have intention of adhering to a five-point ASEAN consensus, reached in April, which calls for an end to violence, political talks and the naming of a regional special envoy.

In a statement, State Department spokesperson Ned Price said that Blinken has called for ASEAN to take appropriate action hastily on the consensus as well as to have a special envoy appointed to Myanmar.

Price said that Blinken has also demanded to have the detainees in Myanmar released as to have the democracy in the country be restored.

He also added that Blinken had pointed out that the Unites States had rejected China’s “unlawful maritime claims” in the South China Sea at the meeting and that Washington is siding with the Southeast Asian nations on the matter against China’s coercion.

According to Price, Blinken had given a pledge for pledged continued US support for a free and open Mekong region under the Mekong-US Partnership. Hishammuddin Hussein, who is the Malaysian Foreign Minister had expressed his hopes that the meeting held indicates a refreshed commitment to US multilateral cooperation in the region.