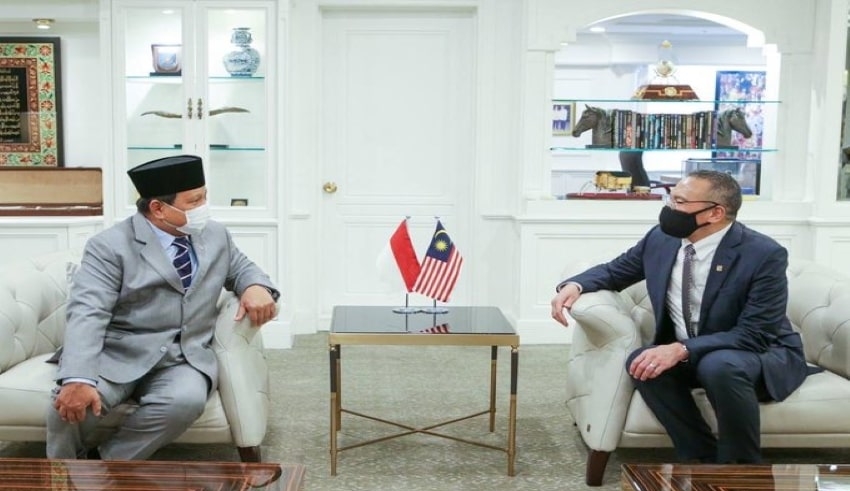 Malaysia and Indonesia have agreed to further increase collaboration between the Malaysian Armed Forces (MAF) and the Indonesian National Armed Forces (TNI) in the form of integrated posts, as well as other means.
(C) HishammuddinH2O / Twitter

Malaysia – In order to bolster border security, Malaysia and Indonesia have agreed to further increase collaboration between the Malaysian Armed Forces (MAF) and the Indonesian National Armed Forces (TNI) in the form of integrated posts, as well as other means.

According to the Senior Defence Minister, Datuk Seri Hishammuddin Tun Hussein, the joint action between the Malaysian Armed Forces and the TNI was now centred at six integrated stations along the Sarawak-Kalimantan border.

It was also agreed that joint exercises between the armed forces of Malaysia and Indonesia would continue, as part of a coordinated effort to counter terrorist threats. He said this would be accomplished through the Malaysia-Indonesia land, sea, and air joint exercise (LATGABMA MALINDO DARSASA), which will be held in Malaysia next year.

It is said in a statement that this combined exercise will include the collaboration of the three branches of both nations’ military services, as well as the police forces.

He also said that Malaysia would host the 42nd Malaysia-Indonesia General Border Committee meeting, which is scheduled to take place in February of the following year. The most recent meeting took place in 2018.

“This meeting is critical in order to discuss steps to improve border security between the two nations.

“Accordingly, I took advantage of the occasion to make a formal invitation to the government of Indonesia, who accepted the offer via the ministry of defense in the republic” (Prabowo Subianto). “Malaysia’s offer was warmly received, and Indonesia has indicated its willingness to participate,” he added.

Hishammuddin also said that he and Prabowo had agreed to strengthen comprehensive defense cooperation between Malaysia and Indonesia, and that, for the first time, a Memorandum of Understanding (MoU) will be executed and signed early next year to that effect.

Additionally, he said that the Trilateral Cooperative Arrangement (TCA) effort, which he began in 2017 with the previous Indonesian Defense Minister, Ramizard Ryacudu, and the former Defense Secretary of the Philippines, Delfin N. Lorenzana, was discussed with Prabowo.

The two defense ministers expressed their appreciation for the active inclusion of their respective armed forces in the TCA through air and maritime patrols, and they agreed that the action plan still needed to be improved in order to address threats in the Sulu Sea and the Sulawesi Sea, according to the ministers’ statement.

Furthermore, it was decided to deepen collaboration via the TCA at the level of the three nations’ defense ministers, and a ministerial level meeting would be scheduled in the near future to explore steps to further develop the TCA initiative. He concluded by saying that

As Hishammuddin pointed out, both Indonesia and Malaysia were resolved to continue to maintain strong bilateral connections, particularly in the area of security, in keeping with one of the Ministry of Defence’s major strategic thrusts, which is the promotion of defence diplomacy.