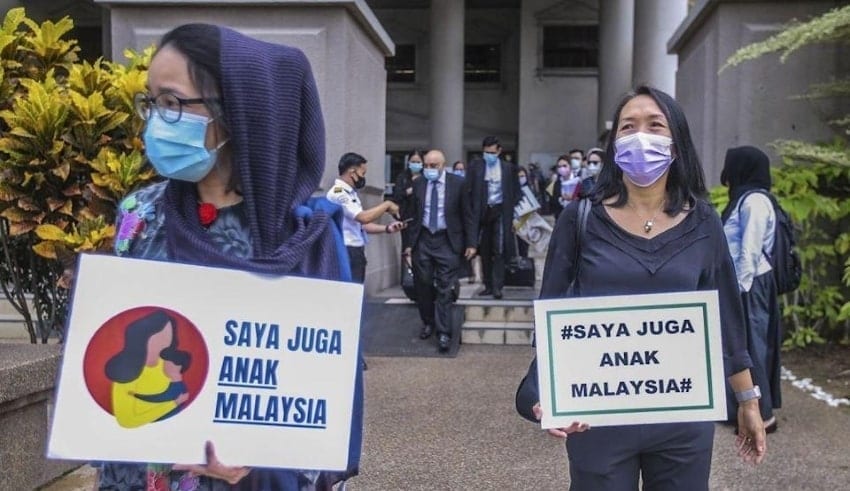 The Malaysian government’s bid against the lawsuit by Malaysian mothers who want their children who are born abroad to automatically be Malaysian citizens has been dismissed by the court.
(C) yahoo

The judge then made a decision to hear the case on substantive issues before ruling on it rather than rejecting the lawsuit before conducting a hearing. After hearing the sides of both the government and the Malaysian mothers, the judge concluded the issue to be under the provisions of the Federal Constitution and considered the case to be discriminatory.

He stated this in reference to the Article 14(1)(b) of the Federal Constitution where conditions about the automatic citizenship are list down. In this lawsuit, the Malaysian mothers pointed out the two constitutional provisions — Section 1(b) and Section 1(c) of the Second Schedule’s Part II — as discriminatory against them, as these provisions mentioned that only Malaysian fathers are allowed to pass on citizenship to their children born abroad and that there were no mentions for the Malaysian mothers in these provisions, which has left those who are married to foreigner husbands unable to pass on Malaysian citizenship to their children born abroad.

It has been noted by the judge that there is a clear gender discrimination in these provisions in Section 1(b) and Section (1)(c)  as it only mentioned “father” compared to the Section 1(a) which mentioned “parents” where it says that a child born in Malaysia can be given a Malaysian citizenship by operation of law given that either the mother or father is Malaysian. “This is an issue which cannot be said to be frivolous,” the judge said when stressing the importance of the matter.

The judge then dismissed the government’s application to strike out the lawsuit and ruled out that Family Frontiers along with the six Malaysian mothers had legal standing to file this lawsuit to ask for court orders, while also asking the government to justify the discrimination in the Federal Constitution’s citizenship laws against Malaysian women.

The judge has demanded the Malaysian government to submit its affidavit by May 27 while the lawyers for the Family Frontiers and the six Malaysian women are to file in their reply by June 10, with written submissions for both sides to be filed in by June 21.

The High Court has also set the hearing if the lawsuit on its merits to be held on June 30. The judge has also given permission for the Malaysian mother’s to add the home minister and the National Registration Department director-general as respondents to their lawsuit