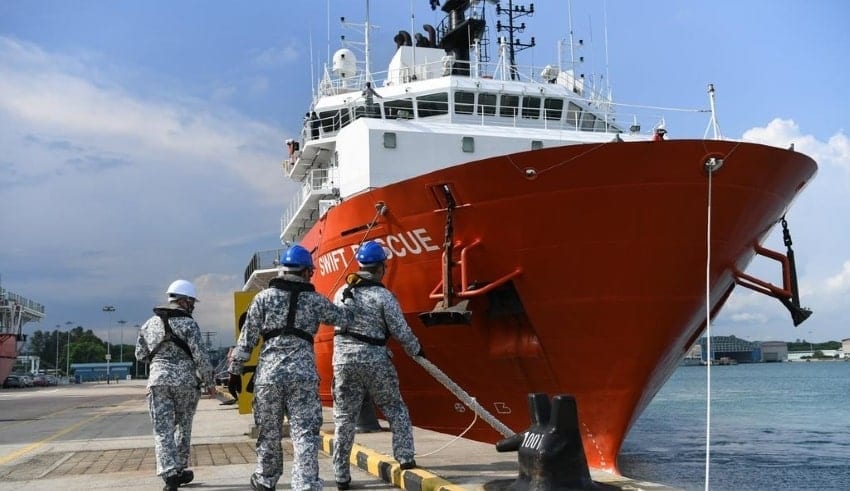 The Singapore Navy has sent a submarine rescue vessel to aid in the missing Indonesian submarine search
(C) todayonline.

The Singapore Navy has sent a submarine rescue vessel to aid in the missing Indonesian submarine search. The missing vessel has 53 people on board and went missing in the waters of Bali Island.

Defense Minister Ng Eng Hen posted on his Facebook page that the Republic of Singapore Navy’s MV Swift Rescue submarine was deployed “as fast as she could get ready” following the Singapore’s Navy Chief, Rear-Admiral Aaron Beng’s receipt of request for assistance coming from the Indonesia’s Defense Ministry.

Govt failed in its bid against Malaysian mother’s lawsuit

He also added that a medical team was also dispatched along with the regular crew sent in case a need for hyperbaric care arise.

Considering the distance of 1,500 km from the search site where search operations are being conducted which is in the deep waters near the Indonesian province of Bali, the MV Swift Rescue sailed off as soon as it could.

An issued statement from the Indonesian military said that they are expecting the deployed rescue vessel to arrive on the search site by Saturday.

The Indonesian submarine, KRI Nanggala-402 went missing as it was doing torpedo drills near the Island of Bali on Wednesday.

According to the Indonesian defense ministry, an oil spill was spotted near the site where the submarine submerged and the ministry has already dispatched four navy vessels in efforts to look for the submarine.

Requests to Australia, Singapore and India has also been sent to aid the existing rescue vessels in the search.

The Malaysian MV Mega Bakti vessel will also be deployed and is expected to arrive on site next Monday.

It was noted in Dr Ng’s post that Singapore and India has considerably close military ties which was strengthened over the years through having bilateral exercises and engagements at all levels. “It is only natural that we do whatever we can to assist in times like this,” he said. Dr Ng also sent his fervent prayers and hopes for the safety of the 53 crew members boarding the missing submarine.