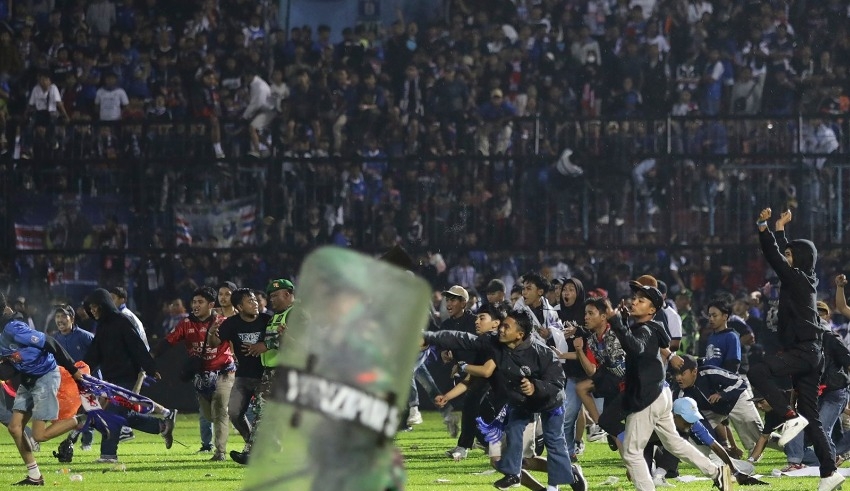 The police at the scene reported the incident as a riot and claimed that two officers were murdered, while the survivors accused the police of overreacting.
(c) CNN

On Tuesday, elite Indonesian police officers were investigated in connection with a stadium stampede that claimed the lives of 131 people, including dozens of children, in one of the bloodiest football tragedies in history.

As public outrage rose, authorities attempted to punish individuals guilty for the crush in the city of Malang, which, according to witnesses, began when officers sprayed tear gas into crowded stands to stop an invasion of the field.

East Java police chief Nico Afinta said during a press conference on Tuesday, “As the regional police chief, I am concerned, disappointed, and at the same time I am apologetic for the security process’s flaws.”

Fans poured onto the field to challenge players and management following a 3-2 setback, the team’s first home loss in more than two decades to its opponents.

The police reported the incident as a riot and claimed that two officers were murdered, while the survivors accused the police of overreacting.

According to witnesses and video footage, officers responded to the pitch invasion with force, kicking and striking supporters with batons, and shoving them back into the stands, where many would be crushed or smothered to death after tear gas was launched.

“If there was a disturbance, tear gas should be shot onto the field, not into the stands,” Arema DC coordinator Danny Agung Prasetyo told AFP.

Wiyanto Wijoyo, a local health official, told AFP on Tuesday that six further victims had succumbed to their injuries.

The investigation, according to the police, is centered on six stadium gates using CCTV footage from cameras positioned outside them. It was stated that the exits were open but too tiny to accommodate the masses attempting to use them.

“These six gates were not locked, although they were quite little. Their capacity is two, yet there were hundreds of people coming out,” said national police spokeswoman Dedi Prasetyo.

However, according to witnesses, parts of the stadium’s doors were locked, leaving those who were unable to jump massive fences to the mercy of tear gas.

“Because the doors were closed, people were pressing.” A 16-year-old survivor of the turmoil told AFP that some people “laid down in the corner” by a closed gate to avoid the crowd.

Praseto reported that the Malang police chief was changed on Monday, nine officers were suspended, and 19 others were placed under investigation in relation to the disaster at the Arema FC-only stadium.

Those suspended, according to him, were members of the Mobile Brigade Corps, or Brimob, a paramilitary element of the Indonesian police force infamous for its violent crowd control techniques.

The Indonesian football association also sanctioned Arema FC on Tuesday, banning the club’s organising committee chairman and a security officer from football for life and fining the team $16,000.

On Monday, fans and Arema FC players gathered outside the stadium to leave flowers and pray for the deaths. On Tuesday, more vigils were scheduled in Malang.

A ministry official for women’s empowerment and child protection told AFP that among the deceased were 32 youngsters, the youngest of whom was between three and four years old.

The FIFA safety guidelines ban the deployment of crowd control gas by police or security personnel on the playing field.

Gianni Infantino, president of the global governing body of football, described the tragedy as a “sad day” for the sport, and UEFA said that a minute of silence would be held at European matches this week.

Pele expressed his sympathy and stated that “violence and athletics do not mix.”

Persistent football fan violence in Indonesia resulted in the exclusion of Persebaya Surabaya supporters from the game.

Fans, though, stated they were not to fault.

On Saturday night, seemingly everything that could go wrong during a football game did, resulting in a calamity never before witnessed in an Indonesian stadium.

Pangeran Siahaan, an Indonesian football analyst, told AFP, “You could see and feel that something awful could possibly occur.”

When entering a football stadium in Indonesia, there are several potential concerns.