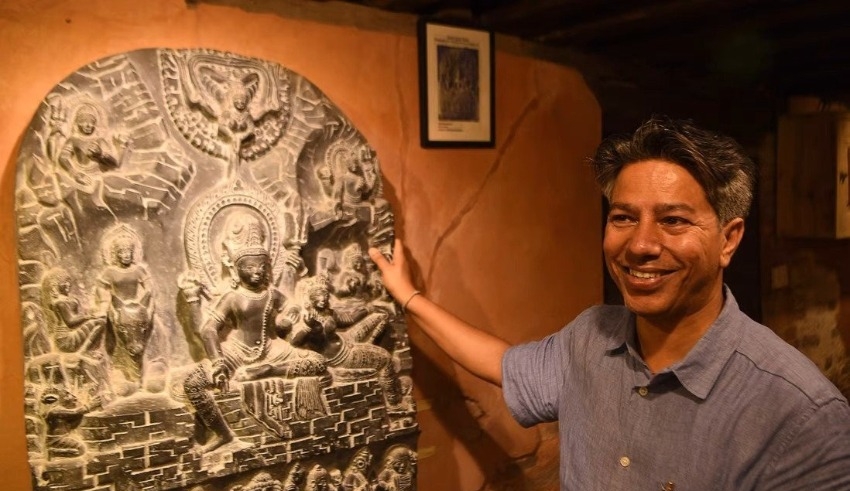 The 400-year old artifact retrieved by the museum in Singapore was previously thought to have been stolen from Nepal and tracked down to Singapore recently.
(c) South China Morning Post

According to the museum in Singapore where the nearly 400-year-old religious artifact is currently on display, it was acquired in accordance with “established procedures” both locally and internationally. The artifact was previously thought to have been stolen from Nepal and tracked down to Singapore recently.

An online initiative to recover lost artistic heritage from Nepal made an announcement on Sunday (August 14) that a sculpture of a Hindu deity that belonged to the Neel Barahi temple, dated 1636, and claimed to have been stolen in 1999 had been “located in the collection of the Asian Civilisations Museum (ACM), Singapore.” The claim stated that the sculpture had been stolen in 1999.

The Facebook post that was made by the Lost Arts of Nepal page was picked up by numerous Nepalese media sites, and they referred to the artifact that has four sides as a “icon of tremendous archaeological importance.”

A representative for the ACM told CNA on Wednesday that the organization was aware of the media stories.

“These procedures include examination by ACM’s acquisition committee, which is made up of external specialists, as well as thorough provenance checks carried out at the time of purchase,” says the author.

In addition, these examinations of the provenance, also known as the ownership record, are benchmarked to worldwide guidelines and assessed on a consistent basis, according to the spokeswoman.

According to a caption located below the Neel Barahi display, which CNA found in the Ancient Religions gallery on the second level of the ACM, a linga is the phallic and cosmic pillar symbol of the Hindu god Shiva. This exhibit was located in the ACM.

But the administrator of Lost Arts of Nepal, who asked to remain anonymous, told CNA that the artifact, which dates back 386 years and was used along with six others to represent shrines to mother goddesses in the Nepalese town of Pharping, which is about 20 kilometers south of the capital city of Kathmandu.

In Pharping, there is a sacred celebration that takes place once a year and dates back hundreds of years; however, four of the original components that make up the seven deities have been lost throughout the years and have been replaced by copies.

According to the person behind Lost Arts of Nepal, the Neel Barahi sculpture in particular was taken on the night of June 16, 1999, from the home of a caretaker who had been entrusted with the responsibility of keeping it secure for the duration of the year.

The activist continued, “We don’t know who stole it, but the cause is (likely) increased demand for Nepalese art and tremendous financial advantages.”

The advocacy group speculated that the Neel Barahi would have passed through a number of different hands before arriving at the ACM in Singapore; however, the precise chain of possession of the object is unknown.

In 2019, Lost Arts of Nepal learned for the first time that the Neel Barahi was part of ACM’s collection, and they later discovered the artifact by accident when looking at a photograph of another display at the museum.

According to the group’s statement to CNA, it has brought up the issue with the Nepal Heritage Recovery Campaign, which is another organization attempting to reclaim heritage items that have been stolen from the country.

The Nepal Heritage Recovery Campaign will, in turn, collaborate with the Department of Archaeology within the Nepali government to connect with Singapore’s Archaeological Conservation Department (ACM) “through diplomatic channels.”

CNA has inquired about the matter by contacting the relevant department as well as Nepal’s Ministry of Culture, Tourism, and Civil Aviation.

“We are sure that we can prove the stolen deity belongs to the people of Pharping,” Lost Arts of Nepal stated. “There is no doubt in our minds that we can make this case.”

“It’s not just a piece of art shown in a museum exhibition; it’s our forefathers, our guardians, and our faith,” said the museum curator.

An 11th-century bronze sculpture that the American Museum of Natural History (ACM) believes was taken out of India without permission was returned to the country’s authorities in 2015.

The sculpture, which depicts a Hindu goddess, was acquired by ACM in 2007 for the equivalent of US$650,000 (S$896,400) from a now-defunct New York gallery that was suspected of engaging in an elaborate antiquities-smuggling operation.