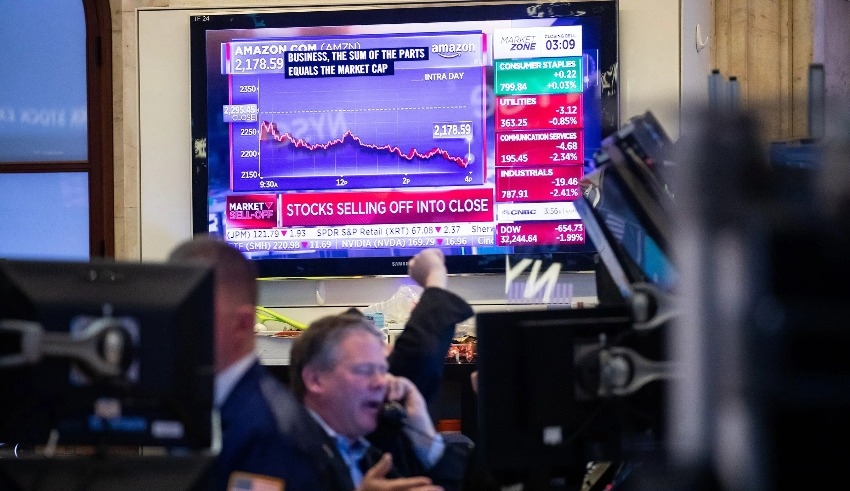 Shares of once-buzzing technology companies have been in freefall this year, with some dropping as much as 70 percent as a result of an uncertain profitability.
(c) Time

Shares of once-buzzing technology companies have been in freefall this year, with some dropping as much as 70 percent as a result of an uncertain climate and concerns about their profitability.

The share prices of technology companies that did well during the COVID-19 pandemic have been hit particularly hard. One example of this is the streaming service Netflix, which has seen its share price fall by around sixty percent since January.

Shares of the Canadian e-commerce company Shopify, which had a surge in business during the pandemic-driven internet shopping boom that occurred over the course of the previous two years, have dropped by around 70 percent so far in 2018.

Even technology companies with their headquarters in Singapore have been affected by the recent sell-off.

On Monday, the price of a share of Grab, which had a highly anticipated initial public offering (IPO) on the Nasdaq stock exchange in December 2021, was $3.73. (Aug 15). This represented a decrease in value of about 48 percent since January and a loss of nearly three-quarters of its worth ever since it was first listed.

Sea, which is the parent company of both the mobile gaming firm Garena and the online shopping platform Shopee, has experienced a decline in the value of its shares on the New York Stock Exchange of almost 61% this year.

Since then, a number of these industry disruptors have made announcements regarding employee layoffs. Shopify announced a month ago that it will lay off approximately 1,000 employees, which is equivalent to ten percent of its global staff. In June, Sea’s Shopee laid off an unknown number of employees in a number of different markets.

According to a previous report by CNA, the layoffs occur at a time when technology companies are “consolidating” their operations in anticipation of a potential economic downturn and when money is drying up as a result of rising interest rates.

As we move forward, the prognosis for the economy of the world as a whole and the fundamentals of the companies themselves are still not at all definite. As a result, investors who are looking to buy beaten-down tech stocks are advised to maintain a cautious stance.

Are tech companies bound to get bankrupt?

However, it appears that the technology industry as a whole, and disruptors within it such as e-commerce and ride-hailing companies in particular, have suffered a heavier hit as investors flee so-called growth stocks in favor of more stable market segments such as energy and utilities.

According to Associate Professor of Finance at ESSEC Business School Asia-Pacific Vijay Yadav, “Shares of all kinds of companies have taken a beating this year but technology companies have lost much more than other sectors.”

“Rising interest rates have a disproportionately bigger negative effect on the valuation of emerging technology companies since their cash flows are often a long way off in the future and, as a result, get discounted more heavily at higher interest rates.”

“The risks of recession and geopolitical uncertainty also hit share prices of emerging technology businesses more since their valuations are generally driven by market mood,” he continued, “and investor sentiment appears to have turned negative in response to the shifting environment.”

The sharp decline in the price of some of these fastest-growing technology firms was also a warning that investors are becoming increasingly wary of businesses that are not yet able to produce a profit.

“The extent of the decline is a reflection of the risk inherent in their business,” said Maybank Securities analyst Samuel Tan, noting that many Internet stocks remain loss-making companies, and that “with much of their value locked up in a “terminal value” in the future when they are profitable… and can be valued through free cash flow models,” he said.

A lot of the high valuations were predicated on assumptions that may or may not pan out, and now that there are impediments in the road, optimism has changed into pessimism. This is something that Associate Professor Nitin Pangarkar from the National University of Singapore (NUS) Business School remarked.

“There is a lot of skepticism in the markets regarding companies that are losing money.”

Even after the recent recovery, analysts say it’s still too early to tell what the future holds for these technology stocks.

Associate Professor Yadav made the following statement in reference to businesses such as Grab, Sea, and Shopify: “It remains to be seen if the recent rise in their share prices was just a bear market bounce or indicates a meaningful turnaround in fortunes for these companies.”

Investors “should be cautious in the current uncertain economic situation,” he warned, despite the fact that the huge falls may provide an opportunity to buy.

A study that was published on an investment news website back in May The similar piece of guidance was provided by The Motley Fool.

Using Shopify as an example, the report pointed out that despite the fact that the stock may appear to be “a clear-cut bargain” after the selloff, there is still the possibility of “rapidly decelerating growth” due to the fact that players in the e-commerce industry will need to find solutions to challenges such as rising shipping and logistics costs.

Even if Shopify is successful in meeting its goals of expanding at a quicker rate than the whole e-commerce market and retaining its position as the industry leader in terms of online selling tools, outperformance is by no means a given. It warned readers to exercise caution when outside.

Associate Professor Pangarkar stated that the sharp declines in share prices highlight how important it is for technology companies to demonstrate their ability to rein in spending and demonstrate fiscal discipline. This is because these companies had previously relied on government subsidies and aggressive marketing to fuel their years of growth at breakneck speeds.

They are no longer able to spend excessively with the sole intention of gaining market share. “You have to have a plan to get to a profitable state,” he advised.

According to Mr. Tan, whose equities research includes Grab and Sea, rising interest rates will have a more significant impact for the share prices of these two technology companies domiciled in Singapore going forward.

According to what he told CNA, “Catching the bottom for these two companies would be challenging.” However, Sea appears to already be trading below what is acceptable vis-a-vis peers, whilst Grab is still at a premium.

He went on to clarify that this was the case because Sea’s valuation is “fully supported” by the profitable operations of its gaming unit, Garena. Because of the same factor, there is a “far lower danger of bankruptcy” associated with the company.

Due to “elevated macro risks,” the business also turned cautious on Shopee and lowered its e-commerce revenue prediction for FY2022 to be between US$8.5 billion and US$9.1 billion, which is a decrease from the previous range of US$8.9 billion to US$9.1 billion.

Mr. Tan warned that the company’s earnings report for the second quarter, which is due before the US market opens on August 16th, could be disappointing. He explained that the results will need to reflect the costs of unwinding the company’s business in Spain as well as the difficulty of dealing with elevated freight rates. There is also the chance that Garena would “disappoint as people game less” as a direct result of the reduction in the number of arrangements for people to work from home.

However, according to the equity analyst at Maybank Securities, e-commerce and gaming are “well-proven and very sticky business models” in the long run. This analyst has a “buy” call on the stock and has set a target price of US$105.

On Monday, the price of a share of Sea’s stock was last seen trading at US$87.42.

Is the internet still a big thing?

As economies begin to recover and readjust to life with COVID-19, Mr. Tan of Grab stated that the shares of the technology company might experience “a short-term elevation.” This would be on the back of favorable sentiment regarding Grab’s ride-hailing business.

Grab’s capacity to reach profitability “remains an obvious risk” for the course of the company’s long-term existence.

According to him, “GMV (gross merchandise value) must quadruple by 2025 in order to reach group profitability and free cash flow positive aim of 2025,” and this is “without factoring in the digital banks, which will have substantial capital requirements.”

GXS Bank, the digital bank joint venture between Grab and Singtel, has been granted licenses to operate in Singapore, Malaysia, and Indonesia. The debut of GXS Bank in Singapore is expected to take place within the next few months.

In accordance with the standards established by the government, the digital bank operating in Singapore must have a minimum paid-up capitalization of S$1.5 billion. According to Mr. Tan, Grab will be required to pay an amount equal to S$900 million because of the portion it holds in the joint venture.

“This does not include the digital banks in Malaysia and Indonesia, as both of these countries have their own capital criteria to fulfill,” he continued. “This is not inclusive.” We are going to keep a careful eye on how the digital bank’s management handles the needs for its capital.

In the meantime, according to Mr. Tan, who referenced the example of the digital-only bank Atom in the United Kingdom, it may take seven years for the digital bank venture to earn a profit. Grab has been given an overall “sell” recommendation by the analyst, with a price objective of $2.29 USD.

Analysts from CGS-CIMB presented a contrasting point of view on Grab, stating that the company’s route to profitability may be sped up as a result of increased ride-hailing fares and decreased levels of competition in a variety of markets during the past few months.

For instance, it mentioned that in the second quarter of FY2022, rates for ride-hailing services in Singapore increased by between 22 and 42 percent, while promotions “dropped considerably.” In addition, it was noted that the food delivery sector offered lower discounts in a variety of markets.

According to the statement made by the analysts in a research dated July 29th, “We believe Grab is at an inflection point with high margin improvement potential commencing (in the) second quarter of FY2022.”

In addition, they stated that they anticipate that the gross merchandise value and segment profitability of the mobility business will “surprise on the upside,” which will assist Grab in reducing its quarterly losses.

Grab reported a loss of $435 million for the first quarter that concluded on March 31. This is a 35% decrease from the loss of $666 million that was reported during the same period in the previous year.

The development in the company’s food and grocery business area, in addition to a resurgence in the mobility business section, were the primary contributors to the 6 percent increase in revenue, which brought the total amount earned to $228 million from 216 million dollars. On August 25, Grab is going to release the results of its second quarter.