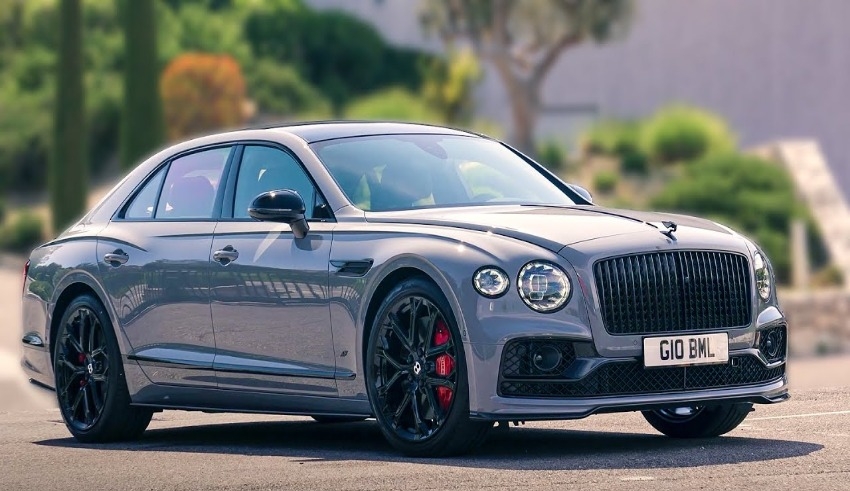 The Bentley Flying Spur V8's spectacular and unified appearance is the product of the largest super formed panel ever seen in the automobile industry.
(c) Youtube

Can a Bentley be driven like a sports car? Evidently, yes.

However, you will be tempted to do so, given that the Bentley Flying Spur is a furious V8 powerhouse. She is an absolute hoot behind the wheel.

We’ve never characterized agility as addicting, but here we are, smugly seated behind the wheel and oblivious to the vehicle’s 2.3-tonne mass. She is both a pleasure to drive and custom-built for individuals who enjoy being driven.

Powered with a 4.0-liter, twin-turbocharged V8 engine that generates 542bhp and 770Nm of torque, the grand limousine accelerates from 0 to 100km/h in an astounding 4.1 seconds. All of this is accompanied by an evocative yet refined exhaust note that you will hardly be able to hear from the cabin’s ultra-quiet insulation.

Imagine how the 6,0 liter, twin-turbocharged W12 model would feel and sound.

Obviously, the handling is outstanding. This four-door V8 is 100kg lighter than the W12 model, making it feel more nimble and quick. It also comes standard with the most recent powertrain and chassis innovations, including Active All-Wheel Drive, Adaptive Air Suspension, and Torque Vectoring by Brake.

This third-generation vehicle is also available with a V6 hybrid drivetrain and is more dynamic, high-tech, and luxury than you could possibly dream.

And the Flying Spur Mulliner, the top-of-the-line model we test-drove, grabbed our imagination — and our emotions — in only one weekend.

The Flying Spur’s spectacular, unified appearance is the product of the largest superformed panel ever seen in the automobile industry, which was manufactured by heating aluminium to 500 degrees Celsius and forming it under air pressure.

As is typical for a luxury limousine of this caliber, it has an extraordinarily long wheelbase of 5.3 meters and 22-inch Mulliner wheels with self-leveling, spinning Bentley “B” emblems.

This somewhat young aspect is complemented by beautiful external decoration that further proclaims that the Flying Spur belongs to a league of luxury that is rarely encountered.

For openers, the double-diamond matrix radiator grille proclaims a distinctiveness that could only be Bentley. The jewel-like LED matrix headlamps on each side have a cut-crystal effect that makes them shine even when they are not lighting.

The tail lamps include the trademark Bentley “B” motif, and if you look closely, you’ll notice that the light strip itself features a complex diamond knurling pattern that mimics the knurling detail on the interior controls.

Inside every Bentley is more intricate craftsmanship, but the Mulliner edition takes it up several notches.

The Mulliner, situated at the very peak of the lineup, oozes next-level luxury with its wealth of customizable options and unmistakable Mulliner styling designed to envelop you in luxury in your totally customized Bentley.

Here, luxury knows no bounds. Every inch of the interior is hand-upholstered and exquisitely finished. The double diamond design on the radiator grille is carried over to the inside, where diamond-quilted seats with embroidered Bentley insignia and three-dimensional diamond-patterned doors convey a level of opulence reserved to first-class travel.

Afterwards, there are the colors. Oh, the exquisite hues! Our test vehicle’s interior was adorned with two-tone tones of white and a maroonish hue they call Cricket Ball, emphasized by accent seat piping and contrast stitching, and it was a sight to behold.

This handcrafted craftsmanship extends to the console’s rotary switches, vents, and an analogue clock (specific to the Mulliner edition), as well as the exquisite marquetry inlays of the sustainably produced veneers.

Thus, Bentley’s latest limousine is its most technologically advanced to date. There are far too many driver and safety assist systems to list, but suffice it to say that drivers can expect to have all the technical aid necessary to maneuver this incredibly lengthy limousine in this metropolitan environment.

The Flying Spur Mulliner has a large four-seat arrangement (as opposed to five seats in other variants) with massage functions for all four passengers.

The optional Rear Entertainment System consists of two detachable, high-definition, 10.1-inch displays installed on the backs of the front seats, allowing passengers in the rear to immerse themselves in an infinite stream of entertainment throughout their journey. Both come preloaded with Netflix and other streaming applications, and the device mirroring function allows you to project content directly from your phone.

As for your musical adventure, you have three top-tier options for your sound system, including Bang & Olufsen and the industry-leading Naim, as well as the ability to stream music wirelessly to your personal headphones via Bluetooth.

Need to complete work while traveling? No issue. Backseat passengers also have access to electronically deployed, luxurious veneer and hide-trimmed picnic tables that unfold similarly to business or first class tray tables on an airplane.

Add an optional two-bottle beverages cooler to the back cabin to create the optimum atmosphere for entertaining and being entertained while on the road.

The intelligent inclusion of an ionizer that filters dust, pollen, and other particles, so maintaining a consistent flow of clean air in the cabin, is undoubtedly appreciated in an age that promotes taking greater care of one’s health. Purity? That is the height of luxury.