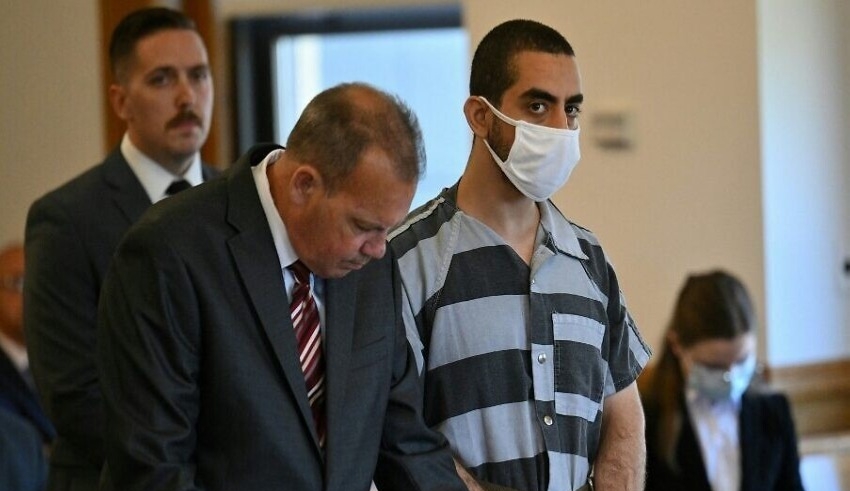 The man who is accused of stabbing novelist Salman Rushdie last week in western New York pleaded not guilty to charges of attempted murder in the second degree.
(c) The Times of Israel

On Thursday (August 18), the man who is accused of stabbing novelist Salman Rushdie last week in western New York pleaded not guilty to charges of attempted murder in the second degree and assault. He was jailed without bail at the time of his arraignment.

Hadi Matar, 24, is suspected of injuring Salman Rushdie, 75, on Friday moments before the author of The Satanic Verses was scheduled to deliver a lecture on stage at an educational retreat near Lake Erie. Matar is accused of carrying out the attack. Rushdie was taken to the hospital with serious injuries in what has been condemned as an assault on the right to freedom of expression by authors and politicians from around the world.

Since his arrest, he has been held in custody, where he can be seen wearing a jumpsuit with gray and white stripes, a white face mask, and shackles on both hands.

Matar was ordered by Judge David Foley not to have any contact with Rushdie, and the judge granted the request of Matar’s defense attorney to issue a temporary gag order, which prevents the parties from discussing the case in the media. He stated that he will take into consideration the request made by the defense to release Matar on bail.

The following month, Matar will appear once more for another hearing.

It has been 33 years since Ayatollah Ruhollah Khomeini, who was the supreme leader of Iran at the time, issued a fatwa, which is a religious decree, calling on Muslims to assassinate Salman Rushdie a few months after “The Satanic Verses” was released. The attack took place on the author. Blasphemous in the eyes of some Muslims were some passages that related to the Prophet Muhammad.

Rushdie, who was born in India to a Muslim family from Kashmir, has had a reward placed on his head for as long as he can remember. As a result, he went into hiding in the United Kingdom for nine years.

In 1998, Iran’s reformist administration under the leadership of President Mohammad Khatami disassociated itself from the fatwa and declared that the danger posed by Rushdie had passed.

Khomeini’s successor, Supreme Leader Ayatollah Ali Khamenei, was suspended from Twitter in 2019 for claiming the fatwa against Rushdie was “irrevocable.” However, the multimillion-dollar prize has since expanded, and the fatwa was never revoked.

Matar stated that he respected Khomeini but would not comment on whether or not the fatwa was the source of his motivation in an interview that was published on Wednesday by the New York Post. He claimed that he had “read a couple of chapters” of The Satanic Verses and that he had seen YouTube videos of the author.

According to a source in the Post, Matar said the following about Rushdie: “I don’t like him very much. He is someone who attacked Islam, and he attacked their ideas and the belief systems that they adhere to.”

On Monday, Iran’s Ministry of Foreign Affairs issued a statement stating that Tehran should not be accused of having any involvement in the incident. According to the statements made by the police, it is likely that Matar acted alone.

Matar is a member of the Shi’ite branch of Islam. He was born in California to Lebanese parents and raised there.

According to the prosecution, he went to Chautauqua Institution, a retreat located around 12 miles (21 kilometers) from Lake Erie, and purchased a ticket to attend Rushdie’s talk there.

According to witnesses, there were no evident security checks at the site, and Matar did not speak while he assaulted the author during the attack. After being taken down to the ground by members of the audience, he was placed under arrest by a member of the New York State Police who was present at the incident.

According to his agency, Rushdie was left with significant injuries as a result of the attack, including damage to the nerves in his arm, cuts to his liver, and the possibility of losing an eye. However, over the weekend, his condition has been steadily enhancing, and he has been removed from the ventilator.