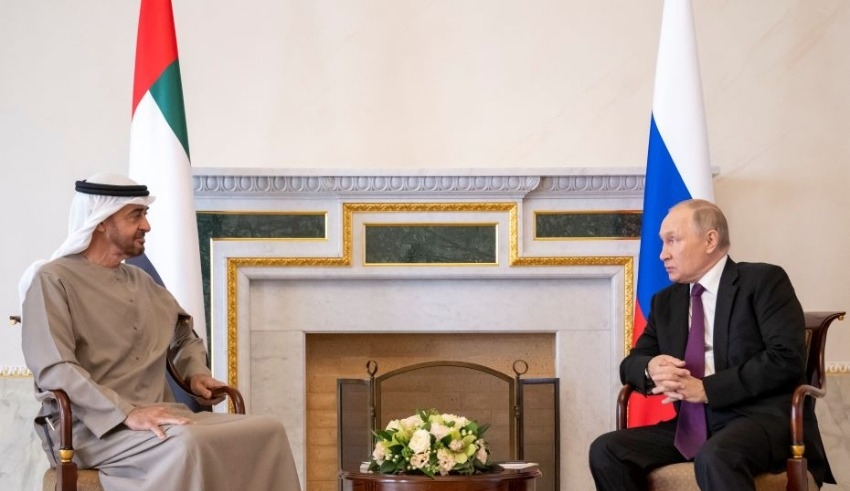 His Majesty Sheikh Mohamed emphasized the necessity for continued engagement between all parties in order to find political solutions to problems and tensions.
(c) Gulf Business

Upon the visit of the UAE President to Russia, His Highness Sheikh Mohamed bin Zayed Al Nahyan, President of the United Arab Emirates, reaffirmed the country’s commitment to building the foundations of global peace and stability in order to alleviate tensions and find diplomatic solutions to problems.

This occurred during a reception organized by Vladimir Putin, President of the Russian Federation, in Saint Petersburg in honor of His Highness Sheikh Mohamed bin Zayed, where they discussed a number of regional and worldwide topics and trends of mutual importance.

His Majesty Sheikh Mohamed emphasized the necessity for continued engagement between all parties in order to find political solutions to problems and tensions. In addition, His Highness reaffirmed the UAE’s support for peace and stability in the regional and international arenas and urged the continuation of serious consultations to address the Ukraine problem via dialogue, negotiation, and diplomacy in order to achieve global peace and security.

Putin, on the other hand, welcomed the quick improvement in bilateral relations between Moscow and the UAE on Tuesday, noting a 17 percent increase in trade exchange as evidence of the development.

Putin informed the visiting president of the UAE, Sheikh Mohamed, that the increase in connections is taking place in spite of the volatile events taking place throughout the region and the world. He highlighted the cooperation between the two nations under the framework of OPEC+.

According to Putin, the goal of this cooperation is to “provide stability in the global energy markets,” which will allow “those involved in production, suppliers to the global markets, and consumers of energy resources to feel calm.”

According to the president of the UAE, the value of bilateral trade between Moscow and the Gulf country has now reached $5 billion. This is despite the fact that the COVID-19 outbreak has dealt a significant economic hit.

Relations with Russia are conducted within the context of a consensus among all the poles in the international community that dialogue and negotiation are essential for achieving convergence of views and resolving any conflict based on the principles of international law.

Despite pressure from the United States and other nations, the Russian leader emphasized MBZ’s support for the agreement made last week by the OPEC+ group, which includes Russia, to reduce oil production by two million barrels per day.

Putin stated, “Our decisions are not meant against anyone.”

“Our activities are aimed at guaranteeing the stability of global energy markets so that both consumers of energy resources and those who deal with production and supplies feel peaceful, stable, and confident, thereby contributing to the equilibrium of supply and demand.”

The decision by OPEC+ to reduce production in order to stabilize prices has infuriated Western nations, as many viewed it as a move that would help Putin pay Russia’s military operations in Ukraine. The production drop also posed a possibility of burdening US President Joe Biden and the Democrats with rising gasoline prices just prior to the crucial US midterm elections.

The United Arab Emirates has maintained tight commercial relations with Russia and resisted joining the sanctions imposed by the United States and other Western allies in reaction to Russia’s invasion of Ukraine.

UAE state news agency WAM reported that during his meeting with Putin, MBZ “reiterated” his country’s commitment to “strengthening the foundations of global peace and stability” and to “lower tensions and find diplomatic solutions to crises” in situations such as the crisis in Ukraine.

WAM reported that the two presidents “discussed a range of regional and international topics and trends of mutual interest.”

This was reinforced in a tweet by the UAE’s leader, who stated: “We addressed various areas of mutual concern, including the Ukraine crisis, and the necessity of engaging in talks to lower tensions and reach a diplomatic solution.”

Putin, for his part, praised MBZ for his mediation efforts, which aided in resolving “very delicate humanitarian concerns” in Ukraine.

Putin stated, “I am aware of your worry about the situation’s evolution and your desire to help to the resolution of all contested problems, including the current crisis in Ukraine.”