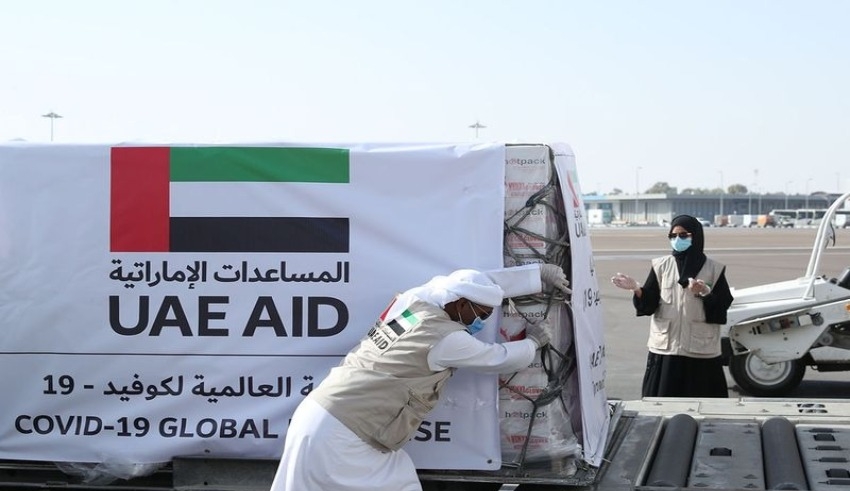 The President of the UAE issued an order mandating the delivery of all forms of humanitarian aid to displaced individuals in an effort to support Pakistan.
(c) Gulf News

President His Highness Sheikh Mohamed bin Zayed Al Nahyan has issued the directive to provide urgent humanitarian help to the Islamic Republic of Pakistan, which is experiencing severe rains and floods that have caused deaths, injuries, and population displacements.

The President of the UAE issued an order mandating the delivery of all forms of humanitarian aid to displaced individuals in an effort to enhance their ability to overcome the problems they are now facing.

The assistance offered by the UAE includes around 3,000 tonnes of food supplies, tonnes of medical and pharmaceutical supplies, and tonnes of tents and shelter-building materials.

The UAE relief teams will also give all forms of humanitarian assistance to Pakistani cadres and institutions tasked with ensuring the safety of people affected and meeting their needs in terms of food, medical care, and logistics.

The National Disaster Management Authority reports that 1,033 individuals have died as a result of the monsoon rains, including 119 in the preceding twenty-four hours.

A number of countries, including the United States, the United Kingdom, the United Arab Emirates, and others, have contributed to a disaster appeal; however, officials believe that additional contributions are required.

They continue by stating that the Pakistani government is making every attempt to assist.

Salman Sufi, an official from the ministry of the interior, told the BBC that the country was in severe need of international assistance.

“Pakistan has been facing economic difficulties, but just as we were on the verge of overcoming them, the monsoon catastrophe struck,” he remarked. Now, just as we were about to defeat them, a monsoon tragedy struck.

Junaid Khan, age 23, told AFP that the home he and his family had painstakingly constructed over many years had begun to crumble in front of their eyes. We sat on the side of the road and watched our dream home sink into the earth.

In Sindh, a province in the southeast of the country that has also been severely affected, thousands of residents have been forced to abandon their homes.

In each and every village we passed through while through Sindh, there were individuals residing in makeshift houses.

On the ground, many are calling it as the worst disaster they have ever experienced, despite the fact that the full extent of the devastation in the province has not yet been determined.

In Pakistan, flooding is a fairly common occurrence, but locals have told reporters that these rains are different from the rest. They were unlike anything ever observed in this place. One of the local officials described them as having “biblical dimensions.”

Thousands of mud homes have been inundated by flooding near the city of Larkana, and the only thing visible for kilometers in every direction are treetops.

In places of the swamp where the water level is substantially lower, thatched rooftops can be seen sticking out from beneath the threatening water.

The survivors require a diverse assortment of supplies. In one of the communities we visit, the villagers who are seated there are famished. In another, they declare that they own their grains but lack the financial means to meet their other basic necessities.

The United Arab Emirates has raised the amount of relief and rehabilitation aid it provides to Pakistan in order to assist the country in effectively coping with the tragic natural disaster.

In light of the recent active relief efforts by the country, the UAE government and people remain united in both letter and spirit with the people of Pakistan during this difficult time.

Saturday, according to a WAM statement, Sheikh Mohamed bin Zayed called Pakistan’s Prime Minister Shehbaz Sharif to offer his condolences to the relatives of the attack’s victims.

He emphasized the total support of the United Arab Emirates for Pakistan’s efforts to emerge triumphant from the fight.

Sharif thanked the president of the United Arab Emirates for the emergency relief delivered to improve the living conditions of those whose lives were interrupted by the floods. Additionally, he praised the UAE’s long standing assistance for Pakistan.