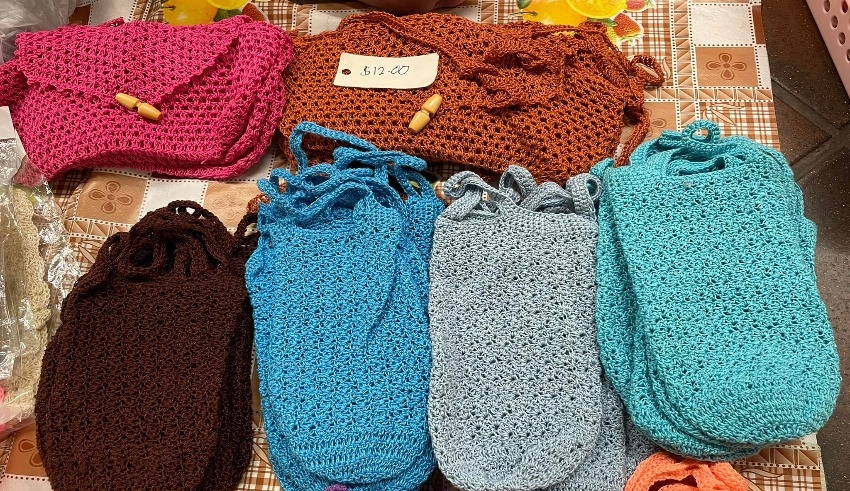 Mrs. Ang, who is now 56 years old, has been crocheting items like coasters, bottle holders, and little handbags at home for decades, and now sells them.
(c) Mothership

Commuters began filing through Exit D at the Toa Payoh MRT station on Thursday morning (August 18) around half past eight in the morning. They were making their way to the train platforms.

However, for Mrs. Catherine Ang, who was sitting on the bare floor that was covered in brown tiles along the underground pathway that led to the fare gates, the day was already approximately half over. Many of these other people were just beginning to begin their day.

Mrs. Ang, who is now 56 years old, has been crocheting items like coasters, bottle holders, and little handbags at home for decades. She sells these things at the MRT station for between S$1.50 and S$6 each and every weekday morning between the hours of 6am and 9am. After that, she takes the quick trip back to her house to recuperate before continuing to crochet for the remainder of the day.

Her side hustle got a lot of attention after a Facebook user named Jaya Dutta posted about it in a group dedicated to acts of communal goodwill on Saturday. Ms. Dutta revealed that she had purchased some crochet bottle holders from Mrs. Ang, who “burst out in tears as she had no (sales) for the last three days.”

The message was also the catalyst for the creation of a topic on Reddit as well as other articles in the media.

It’s possible that this is why Mrs. Ang’s goods were nearly all gone when CNA stopped by on Thursday. She was on the verge of keeping a brown picnic mat that she used to exhibit her wares, despite the fact that she still had a few bottle holders and little handbags available for purchase.

Mrs. Ang says that she is happy to take special orders and that she can crochet shawls, ornamental pieces, larger handbags, and tablecloths for customers. However, these items have a higher price tag and need a significantly longer production time. As an illustration, she can crochet a tablecloth in two to three weeks and charge sixty Singapore dollars for it.

She told CNA that “Whatever you want, I can make,” and she reiterated this remark several times throughout the course of the conversation that lasted an hour.

A closer inspection of Mrs. Ang’s minimalist setup reveals not only that she sits barefooted on the floor without a mat, but also multiple handwritten placards that include a price list and a message regarding the motivations behind what she does: That she required financial assistance so that she could replenish her transportation fare card and provide for her sister.

After their parents were killed in a vehicle accident when they were two and a half months old, Mrs. Ang and her twin sister, Christabel, were left without parental care and became orphans. They stayed with a foster family until they were 11 years old, and then they went into a children’s home, which is where they spent the rest of their childhood.

When Mrs. Ang was a teenager, she came here to learn how to crochet, sew, and create carpets, all of which became interests that she has maintained up till the present day. Christabel is currently residing at a welfare home in Telok Blangah after it was determined that she suffers from a mental ailment. Mrs. Ang stated that Christabel is unable to move or converse in a normal manner.

On every Saturday, Mrs. Ang travels to see her sister. “I’ve been visiting her for 35 years,” she said as she played a video of herself taunting Christabel while she was at the nursing home. Christabel was smiling throughout the interaction. “I’m five minutes older than she is by five minutes; tell me, how is it possible for the younger person to take care of the older person?”

However, Mrs. Ang is resolved to assist her in any manner that is feasible, and she reminds her that the sales of her crochet work provide her with more spending money. In addition, Mrs. Ang receives monthly financial assistance from the government, and she shares her home with her husband, who is 65 years old and works as a cleaner. They don’t have any kids of their own.

A man soon arrived and made the decision to purchase the remaining four bottle holders for the price of S$24. Mrs. Ang is pleased when people compliment the appearance of her wares and buy them. She uses the process of figuring out change for customers as a brain workout, and when she’s at home, she crochets to pass the time.

“I consider myself an artist, and this is both my craft and my expertise. My hands are unable to stop (crocheting) once they have begun “She said this while pointing at other persons who stood across from her in order to sell tissue paper, most likely in order to feed off the attention caused by Mrs. Ang’s wares.

“I did not approach anyone for financial assistance. The two gentlemen in front of you are selling tissues, but I have handbags, coasters, and tablecloths for sale. I am able to create anything you might possibly want.”

Mrs. Ang admitted that there were potential legal ramifications associated with selling items at an MRT station and stated that employees of the station had previously requested her to move. She has been doing business at the walkway for the past four years because it is located close to her house and has a satisfactory amount of foot traffic.

Mrs. Ang stated that the only reason she was in the area was to sell the items that she had manufactured at home, and that if she was told to leave the area, she would do so immediately.