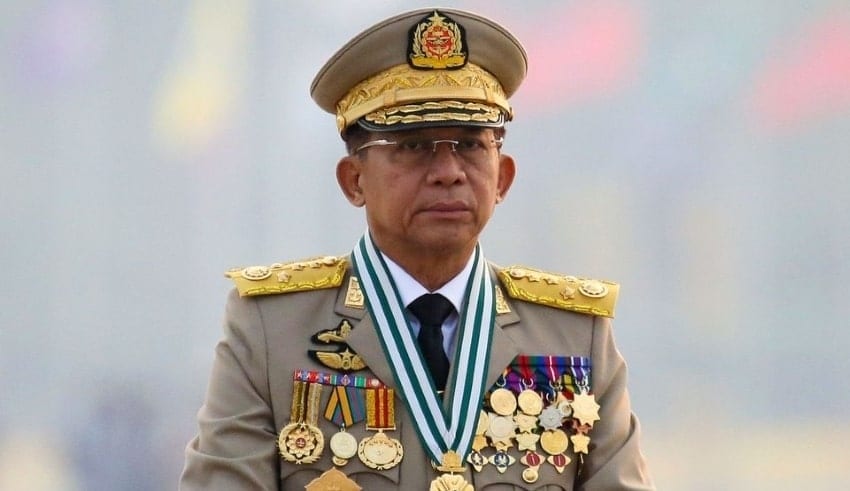 Myanmar junta leader is set to join the upcoming ASEAN summit this April 24 that will be held in Indonesia which is going to be his first foreign trip since the coup started on February 1.

The coup has left Myanmar in turmoil and has caused the death of about 728 people in the security forces’ efforts to stop protests after democratic leader Aung San Suu Kyi was ousted by Min Aug Hlaing.

Myanmar activists calling for a new campaign against the junta

According to a resident, the most recent incident of violence was when two protesters in the ruby-mining town of Mogok was dead shot. Meanwhile, it was reported by the media that small bombs were set off in the city of Yangon which caused casualties.

Despite Myanmar’s neighboring countries’ efforts to urge the junta and the ousted government to have political discussions, the military has appeared unwilling to do so.

According to Thai foreign ministry spokesman Tanee Sangrat, various leaders of ASEAN including Min Aung Hlaing have confirmed their attendance for a meeting set in Jakarta.

Whereas, the spokesperson for junta is not giving any comment on the matter nor answering any calls.

Politicians who are pro-democracy which includes the members of parliament that were ousted by the military junta together with Suu Kyi and the leaders of an anti-coup protests and ethnic minorities have announced the formation of National Unity Government (NUG).

The NUG is asking to be recognized internationally as the legitimate authority, and is requesting to be the one to embody Myanmar in place of Min Aung Hlaing in the ASEAN meeting.

NEW YEAR AMNESTY Under the New Year amnesty, 23,184 arrested activists since the coup were released from prisons across Myanmar on Saturday.

Saturday is the first day of Myanmar’s New Year and the last day of a five-day holiday where citizens visit Buddha temples, water throwing and parties are being held in the streets.

Suu Kyi is one of the 3,141 prisoners linked to the coup arrest.

According to Prisons Department spokesman Kyaw Tun Oo via call, the released prisoners were primarily arrested from the February 1 coup although there were also some who got arrested later on which he gave no details on the reason. A report on a state television shows that there were 137 foreigners who can possibly get deported among the prisoners but the specifics of the offense that caused the arrest were not given.