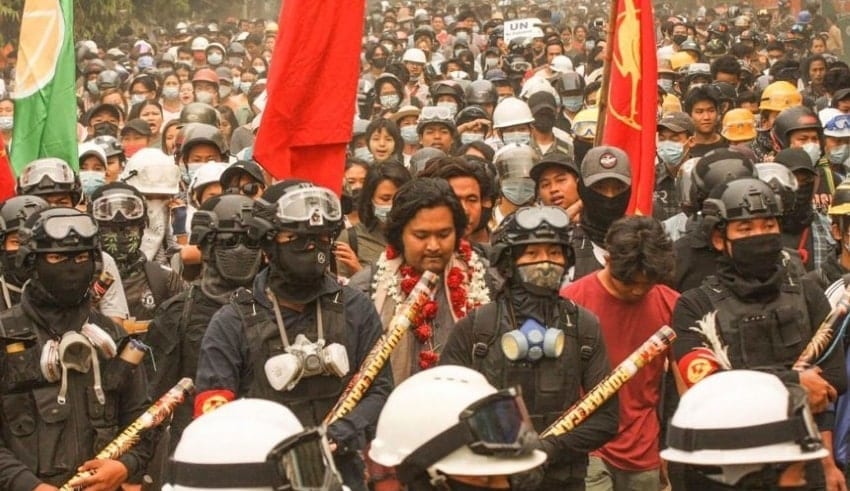 Wai Moe Naing got arrested by the authorities on April 15 after getting hit with a car by the security while leading a motorbike protest rally in Monywa.
(C) Wai Moe Naing

It was reported on Wednesday that authorities would be filing charges of murder and treason against a protest campaign’s main leader. Wai Moe Naing got arrested by the authorities on April 15 after getting hit with a car by the security while leading a motorbike protest rally in Monywa.

It has been broadcasted in Myanmar Television that there are several charges filed against him which involves murder and treason. The 25-year-old Muslim Wai Moe Naing has become known as one of the most preeminent opposition leaders during the Feb 1 coup which ousted the democratic leader Aung San Suu Kyi along with its government. It is still uncertain if Naing has a defense lawyer.

Andrews call to UNSC to take action against military junta

TNI Stands Over the Security Disturbance in Papua

Pro-democracy protests across Myanmar have been prominent especially in Monywa having it as the center of opposition following the Feb 1 coup.

According to group of activists, protesters of about 750 people has been killed by the military.

Officials of Thailand has also reported that due to increasing air strike between the military and the ethnic minority Karen insurgents in the east, more and more villagers are moving into Thailand.

Pro-democracy unity government of Myanmar has been formed in order to fight against the military junta while also ruling out discussions on the crisis until all political prisoners are released.

ASEAN was troubled by the disturbance happening in Myanmar. Discussion with junta Chief Senior General Min Aung Hlaing has been held on Saturday in the capital of Indonesia in efforts to look for ways to resolve the crisis.

Pro-democracy National Unity Government (NUG) was not invited by ASEAN to the said discussions despite their call for the group to be treated as a legitimate representative of the people.

“Before any constructive dialogue can take place, however, there must be an unconditional release of political prisoners including President U Win Myint and State Counsellor Daw Aung San Suu Kyi,” Minister Mahn Winn Khaing Thann who is the NUG prime minister, said in a statement. Meanwhile, still no response has been given by ASEAN as well as by the military spokesperson.