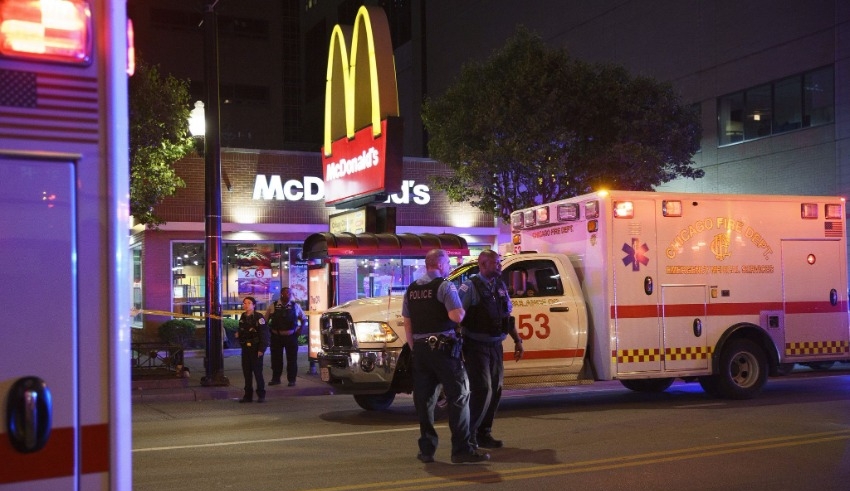 Over 36 people were injured in Monday's attack in the Chicago suburb of Highland Park by someone with a high-powered rifle during an Independence Day parade.
(c) Chicago Tribune

CHICAGO: Over 36 people were injured in Monday’s attack in the Chicago suburb of Highland Park by someone with a high-powered rifle during an Independence Day parade (Jul 4).

Robert E Crimo III, 22, was detained following a manhunt, according to AFP. Highland Park Police confirmed that charges would be brought.

Authorities said the gunman opened shooting at roughly 10:15 a.m., nearly three-quarters of the way through the march.

An alley ladder that was tied to the building was used by the shooter to go to the business’s rooftop, according to Lake County Major Crime Task Force spokesperson Christopher Covelli.

Several of the victims were found dead at the scene, and one was transferred to a nearby hospital, where he later died. The names of the victims and the extent of their injuries have not been revealed by police.

According to Jim Anthony, a spokesman for NorthShore University Health System, the incident left more than 36 people injured, the most of them shot in the leg or arm. From eight to 85 years old, the victims were brought to Highland Park Hospital.

The five persons killed in the procession were adults, according to Lake County Coroner Jennifer Banek, who said she did not know anything about the death of the sixth person, who was taken to a hospital and died there.

In a tweet, Mexico’s director for North American affairs, Roberto Velasco, acknowledged the death of a Mexican person in Highland Park while also confirming the injuries of two other Mexicans.

Pritzker stated in a statement, “There are no words for the kind of monster who sits in wait and fires into a crowd of families with children spending a holiday with their community.”

“On a day that we came together to celebrate community and freedom, we are instead mourning the awful loss of life and grappling with the terror that was inflicted upon us,” Mayor Nancy Rotering said of the violence. “It has shook us to our core.”

Joe and Jill Biden were “struck by the terrible gun violence that has yet again caused sadness to an American community on this Independence Day,” the Bidens stated in a statement released Monday.

In Philadelphia, a visiting Filipino lawyer is shot in a random shooting

The cities of Evanston, Deerfield, Skokie, Waukegan, and Glencoe all canceled activities. After the shooting, the Chicago White Sox tweeted that a scheduled post-game fireworks spectacular had been canceled.

In Highland Park, a little town north of Chicago, you’ll find mansions and expansive lakeside estates that have enticed the rich and famous, including NBA legend Michael Jordan, who lived in the area for years while he was a member of the Chicago Bulls.

Gina Troiani thought she heard fireworks as she and her kid waited in line to enter the parade with their daycare class, but then she heard screams about a shooter and realized it wasn’t. In a video taken by Troiani, some of the children can be seen running to the side of the road when a siren sounded close.

A swag of red and blue coiled ribbons adorned the child’s bike as he rode it down the street. The city stated on its website that a children’s bike and pet parade would be part of the celebrations.

There were reports that Troiani was rushing through the neighborhood with her son’s bike as she made her way back to their car.

There is a good chance that this incident will reignite the discussion in the United States regarding gun regulation and the effectiveness of tighter restrictions in preventing mass shootings here at home.

However, it doesn’t prohibit the sale of assault-style firearms or high-capacity magazines, but it does allow access to information on juveniles who have committed severe crimes.