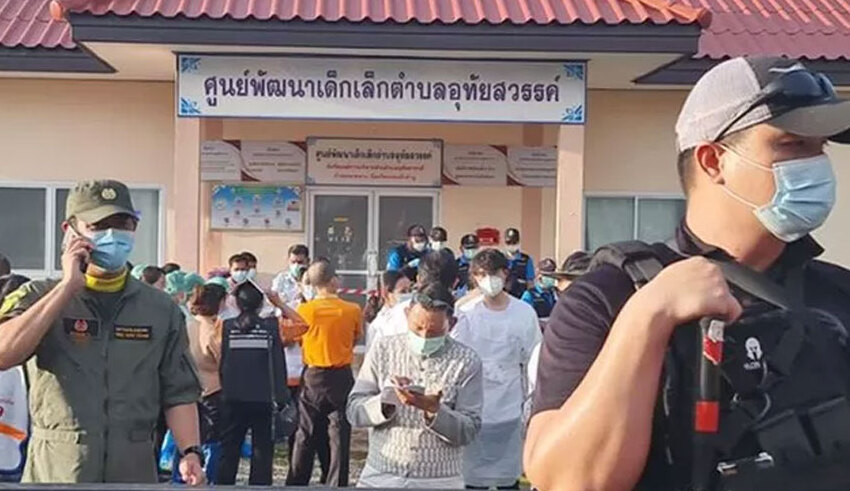 While mass shootings are uncommon in Thailand, gun ownership rates are quite high for the region. According to the police, the gunner murdered his wife first.
(c) FBC News

At least 37 persons, the most of whom were children, were killed by an ex-police officer with a gun and a knife at a daycare center in northeast Thailand.

Police allege that he then killed himself and his family following the attack in Nong Bua Lamphu province and a subsequent manhunt.

Children and adults are among the victims at the daycare; according to the police, the assailant primarily stabbed his victims before fleeing the scene.

The former officer, aged 34, was fired for drug use in June, according to authorities.

It is unclear whether the attack had a motivation.

At least 23 children were among the victims of the massacre in Utthai Sawan. Some victims as young as two years old were attacked while sleeping.

Twelve injured individuals have been sent to the Nong Bua Lamphu district hospital.

Nanticha Panchum, the school’s principal, stated that the assailant’s kid once attended the school but hadn’t been there for a month.

She stated that the father was always pleasant and chatty when he dropped off his child.

Due to inclement weather and a school bus breakdown, Ms. Panchum reported that there were fewer than 20 students in attendance at the school on Thursday.

Videos published on social media appear to show parents and relatives of the victims gathered at a shelter outside the center, crying and distressed.

After the attack, police officers were greeted with horrifying scenes, including the remains of people and children, some of whom were very young, lying inside and outside the building.

Panya Kamrab, a local guy who was a police sergeant until he was suspended for drug usage in January and then fired in June, has been identified by authorities as the assailant. It is believed that he appeared in court on Thursday to face accusations relating to the alleged use and sale of methamphetamine. On Friday, the verdict was expected to be rendered.

After the killing spree, the assailant departed the site in a white four-door Toyota pick-up truck with Bangkok license plates, according to the police, who initiated a manhunt and ordered residents to remain indoors for their own safety.

According to eyewitness accounts, the perpetrator drove into bystanders and fired fire on several of them as he fled, hurting numerous individuals.

According to the police, upon returning home, Kamrab murdered his wife and children before committing suicide.

While mass shootings are uncommon in Thailand, gun ownership rates are quite high for the region. According to the Reuters news agency, illegal firearms are widespread in the south-east Asian nation.

The attack on the nursery comes less than a month after an army soldier killed two of his colleagues at a Bangkok post.

A soldier killed 29 people and injured hundreds more in Nakhon Ratchasima in 2020.