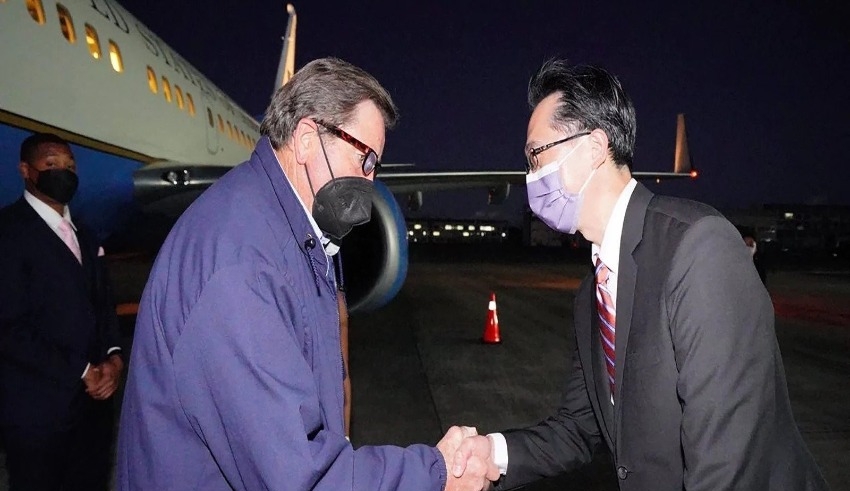 According to the Ministry of Defense, 11 Chinese aircraft either crossed the middle line of the Taiwan Strait or entered Taiwan's air defense zone on Sunday.
(c) Hindustan Times

On Sunday (August 14), a group of lawmakers from the United States arrived in Taiwan for a two-day trip during which they will meet President Tsai Ing-wen. This is the second high-level group to visit Taiwan while there are military concerns between the self-ruled island and China.

Beijing, which claims democratically controlled Taiwan as its own territory, has conducted military maneuvers surrounding the island as an expression of its unhappiness over US House of Representatives Speaker Nancy Pelosi’s visit to Taipei in early August. The island is located in the Taiwan Strait.

According to the de facto US embassy in Taipei, the delegation is being led by Senator Ed Markey, who is being joined by four House congressmen on what is being portrayed as part of a bigger visit to the Indo-Pacific area. The trip is being described as being part of a larger visit to the region.

According to Taiwan’s presidential office, the group is scheduled to meet with Tsai first thing on Monday morning.

The Senate Foreign Relations East Asia, Pacific, and International Cybersecurity Subcommittee is under the leadership of Senator Markey. According to a representative for Markey, Representative Don Beyer and Representative John Garamendi, both of whom are members of the legislative Nuclear Weapons and Arms Control Working Group, will be the co-leaders of the tour.

The Chinese embassy in the United States’ capital city of Washington issued a statement on Sunday stating that “members of the United States Congress should act in consistency with the United States government’s one-China policy.” The embassy also argued that the most recent congressional visit “once again proves that the United States does not want to see stability across the Taiwan Straits and has spared no effort to stir up confrontation between the two sides and interfere in China’s internal affairs.”

A spokesperson for the National Security Council in the White House stated that members of Congress have been going to Taiwan for decades and will continue to do so. The spokesperson also stated that such visits were in accordance with the one-China policy that the United States has maintained for many years.

“Will reiterate the United States’ support for Taiwan as dictated by the Taiwan Relations Act, US-China Joint Communiqués, and Six Assurances, and will urge stability and peace across the Taiwan Strait,” according to the statement released by Markey’s office.

A Matter of Shared Interests

The group will meet “with elected leaders and members of the private sector to discuss shared interests including reducing tensions in the Taiwan Strait and expanding economic cooperation, including investments in semiconductors,” according to the statement released by Markey’s office. The Taiwan Strait is a body of water that separates mainland China and Taiwan.

The first visit of the trip was in South Korea, and while there, Senator Markey met with President Yoon Suk-yeol of South Korea.

While Markey arrived at the Taoyuan international airport, photographs provided by Taiwan’s Ministry of Foreign Affairs showed four lawmakers were greeted upon their arrival at Taipei’s downtown Songshan airport after arriving aboard a US air force cargo jet.

China is still engaging in military actions, despite the fact that the maneuvers it was conducting around Taiwan have ceased.

According to the Taiwanese Ministry of Defense, eleven Chinese military aircraft either crossed the middle line of the Taiwan Strait or entered Taiwan’s air defense zone on Sunday. According to the government, thirteen planes were able to fly through the strait on Saturday.
Officials from the United States have stated that Beijing “overreacted” to the arrival of Representative Nancy Pelosi and used it as a pretext to try to change the status quo in the Taiwan Strait.