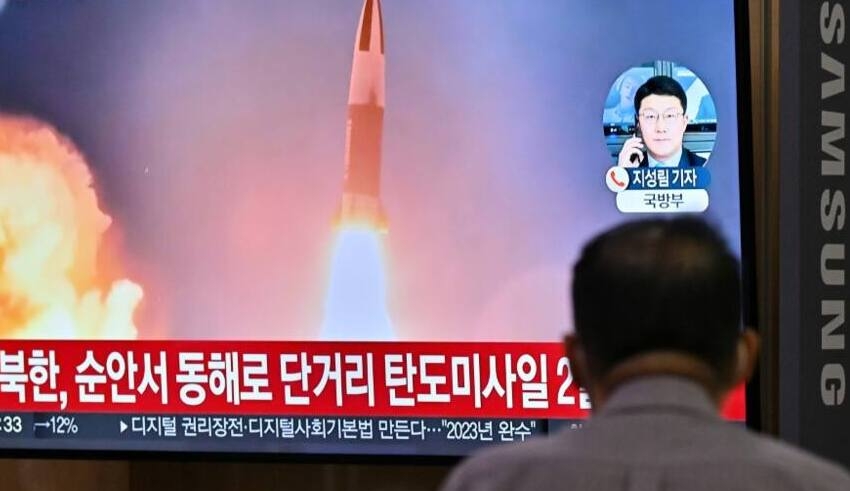 Countries of South Korea and Japan think the rocket may have been an ICBM, North Korea's longest-range weapon designed to carry a nuclear bomb around the world.
(c) Legit

On Thursday, November 3, North Korea launched multiple ballistic missiles, including a probable failed intercontinental ballistic missile (ICBM) that prompted an alarm for inhabitants in regions of central and northern Japan to seek shelter.

In spite of an earlier government warning that a missile had flown over Japan, Tokyo later stated that this was false.

The missile may have been an ICBM, which are North Korea’s longest-range weapons and are meant to carry a nuclear payload to the opposite side of the earth, according to South Korean and Japanese officials.

Yonhap news agency said that South Korean officials believe the intercontinental ballistic missile failed in flight, but did not elaborate. A representative for South Korea’s defense ministry declined to confirm the potential failure.

Yoji Koda, a retired vice admiral and former fleet commander of the Japan Maritime Self Defense Force, stated that the loss of radar tracking on the missile indicated a failure launch.

“It means that at some point along the missile’s flight route, it encountered a malfunction and disintegrated,” he explained.

Even though the warhead landed in the ocean between the Korean peninsula and Japan, debris traveling at high speed may have still traveled over Japan, according to Koda.

According to South Korean and U.S. sources, North Korea has failed multiple ICBM tests this year.

The launches occurred a day after North Korea fired at least 23 missiles, the most ever in a single day, including one that landed for the first time off the coast of South Korea.

According to the J-Alert Emergency Broadcasting System, inhabitants of the Japanese prefectures of Miyagi, Yamagata, and Niigata were cautioned to seek shelter inside following the first launch on Thursday.

“We identified a launch that had the potential to fly over Japan, which prompted the J Alert, but after confirming that it had not flown over Japan, we cancelled the alert,” Hamada told reporters.

According to him, the first missile reached a height of around 2,000 kilometers and a range of 750 kilometers. A missile is launched into orbit with a “lofted trajectory” to avoid flying over neighboring nations.

A few minutes later, in brief remarks to reporters, Prime Minister Fumio Kishida stated, “North Korea’s repeated missile launches are an atrocity that must be overlooked.”

Japan’s Coast Guard stated that the missile had fallen about half an hour after the launch was first reported.

The Joint Chiefs of Staff of South Korea reported that the long-range missile was launched from an area close to the capital of North Korea, Pyongyang.

After approximately one hour, South Korea’s military and the Japanese coast guard reported a second and third North Korean launch. Both of these, according to South Korea, were short-range missiles launched from Kaechon, north of Pyongyang.

After North Korea’s launches on Wednesday, including one missile that landed less than 60 kilometers (40 miles) from South Korea’s shore, South Korean President Yoon Suk-yeol referred to the flights as “territorial incursion” and the United States condemned them as “reckless.”

The flurry of launches led to uneven and occasionally contradictory reports from Japanese and South Korean authorities. The US military, which possesses some of the most advanced tracking systems in the region, stated that it was “informed” of the launches but provided no further information.

“Neither country possesses the very dependable and desirable space-based infrared sensors available to the United States, which enable quick identification of missile stages as they ignite,” he said.

The launches occurred after Pyongyang urged that the United States and South Korea cease their large-scale military exercises, claiming that such “military haste and provocations” could no longer be permitted.

It has previously stated that the recent flurry of missile launches and other military operations were a protest against these exercises.

The allies have been conducting one of the largest air exercises in history, with hundreds of South Korean and American jets, including F-35 fighters, simulating missions around the clock.

Seoul and Washington assert that the exercises are defensive and necessary to confront North Korean threats.

North Korea fired a ballistic missile over Japan on October 4 for the first time in five years, prompting a warning for civilians to take cover. It was the farthest a North Korean missile has ever been launched.