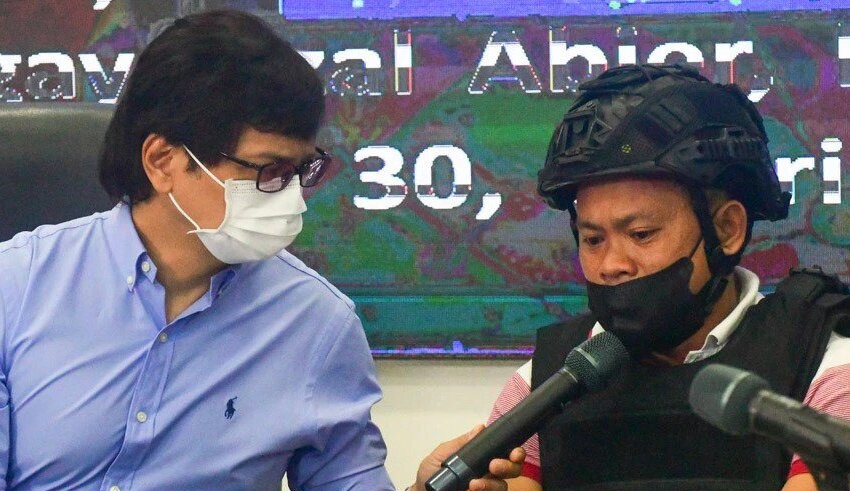 On October 17, Head of Dept. Abalos presented Joel Estorial and reported that the alleged shooter in the slaying of Lapid had turned himself in out of fear.
(c) ABS-CBN

Benhur Abalos, secretary of the Department of the Interior and Local Government (DILG), revealed on Tuesday, October 18 that the alleged suspect in the murder of broadcaster Percival “Percy Lapid” Mabasa had turned himself in to the authorities.

Abalos presented Joel Estorial and stated that the alleged shooter in the death of Lapid turned himself in out of fear on October 17. The interior minister noted that Estorial also made an extrajudicial confession, which means he did so outside of a court or as part of a legal action or investigation.

“I was terrified, but I confessed to the murder of Percy Lapid,” Estorial stated, adding that he did so since his face had already been displayed on the closed circuit television (CCTV).

Abalos, the head of the Department of the Interior, asserted that there are at least three reasons why Estorial is the suspected suspect.

According to Estorial, the order to kill Lapid apparently originated within the New Bilibid Prison. Six of them were responsible for the murder, and they were paid a total of P550,00.

In a message to Rappler, Lapid’s brother, prominent writer Roy Mabasa, said they want to see the suspect in person and conduct a further investigation: “I want a walk through…Matching ng (of the) CCTV footages and the gunman.”

Abalos stated that Estorial also identified three more murderers: brothers Edmon and Israel Dimaculangan, and a certain “Orly” or Orlando. Estorial indicated that Orly was the driver and Israel was the passenger.

(Whoever arrives at the crossroads must fire the gun. I arrived at the intersection and was warned that if I did not fire the pistol, I would be killed.)

“Estorial will remain in the custody of the police. The investigation is ongoing,” Abalos stated.

Since he mentioned that the order originated from Bilibid, the authorities have yet to determine if Estorial is a civilian or a prisoner. In addition, they must explain whether Estorial was in a different car during the murder.

The DILG and the Philippine National Police (PNP) did not provide any additional information regarding the incident. They invited the press to the briefing, but at the press conference, they did not entertain many questions.

Lapid was murdered in Las Pias on October 3rd. Lapid, a fervent critic of former president Rodrigo Duterte and current president Ferdinand Marcos Jr., is the second journalist to be murdered by Marcos Jr.