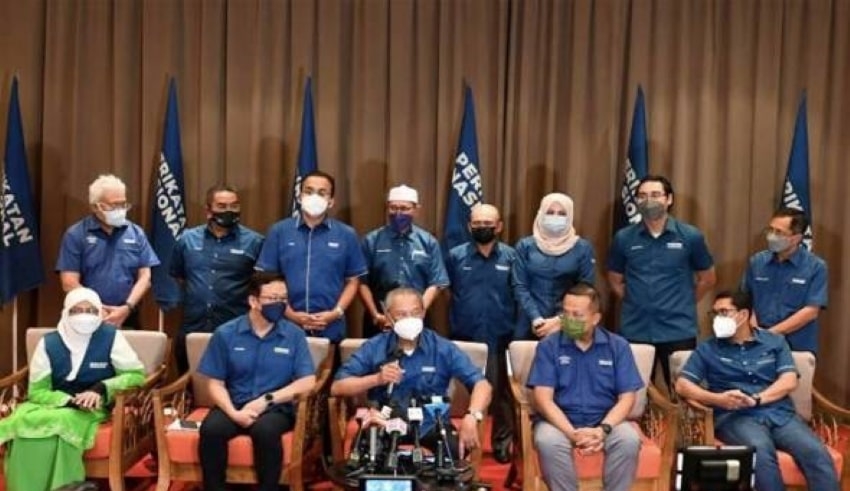 Perikatan Nasional (PN) chairman Tan Sri Muhyiddin Yassin gave his assurance that the coalition stuck to its principles of fighting corruption and abuse of power compared to other political coalitions vying for control of Melaka in the coming state elections.
(C ) MuhyiddinYassin / Twitter

Malaysia – Perikatan Nasional (PN) chairman Tan Sri Muhyiddin Yassin gave his assurance that the coalition stuck to its principles of fighting corruption and abuse of power compared to other political coalitions vying for control of Melaka in the coming state elections.

In an apparent dig at Barisan Nasional (BN), particularly under the administration of Datuk Seri Najib Razak, Muhyiddin said there is an urgent need for the country’s political landscape to change.

“It has come to a point where the political landscape must change, that the history of Barisan Nasional must come to an end.

“They governed for six decades. Now the people have changed. They are more open-minded and savvier when it comes to accessing information that makes them more insightful and knowledgeable. They want Malaysia to be built on a fair and just foundation. They are against corruption and any form of abuse of power.

Muhyddin also explained that he could have acted recklessly and even done the same political manoeuvring, by asking two of Bersatu’s assemblymen to pull their support for the Umno-led Johor state administration or even called for a general election instead of resigning as prime minister in August.

However, Muhyiddin stated that he was concerned about the state of the country as it was facing an unprecedented threat in the Covid-19 pandemic and instead decided to prioritise the wellbeing of the rakyat.

“If we have an evil intention or are simply acting for our political benefit, look at what happened in Perak where Faizal was leading the state administration but was toppled despite having an agreement with Umno under Datuk Seri Zahid Hamidi.

“Melaka it was promised early on that it would be governed by Bersatu but Umno governed it instead, and now it has fallen. I can act the same way for the state of Johor, simply by asking two of the assemblymen to pull out from the state government, and then the government would fall.

“But when I think back, looking at the situation in Melaka, why would I act so stupidly, with an evil intention to create the same issue in Johor,” he said, adding that he would not want to jeopardise the wellbeing of the people.

Two of them are now contesting the election on the Opposition Pakatan Harapan’s ticket. Melaka voters head to the polls on November 20.