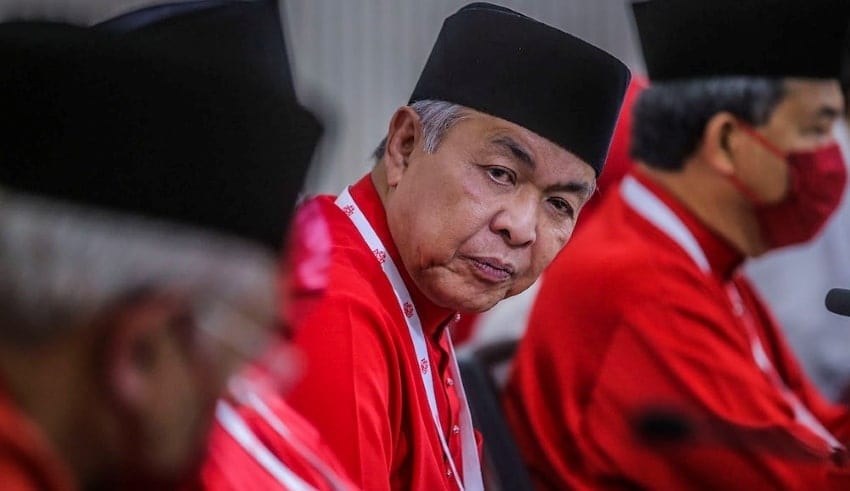 UMNO party president Datuk Seri Ahmad Zahid Hamidi reminded the party of their “excellent” contribution along with bringing stability to the country under the BN coalition.
(C) Malay Mail

As the party celebrated its 75th birthday, UMNO party president Datuk Seri Ahmad Zahid Hamidi reminded the party of their “excellent” contribution along with bringing stability to the country under the BN coalition.

In a posted video on his Facebook page, Zahid told its members that the public is now supporting the party amidst its struggle in facing pressures both from external and internal factors. “As the oldest party that has governed the country for 63 years, Umno’s excellent track record in steering the country cannot be denied. The people believe that stability can only be appreciated with Umno and Barisan Nasional.

“The people want to support Umno again. Even though now Umno is pressured from within and without. But believe that time is on our side. Even if Umno’s age is now 75 but there is nothing to stop us from rejuvenating the party,’’ he said. He also said that the party will remain as the biggest and the most trusted political party in Malaysia because of its comprehensive organization structure.

Zahid pointed out that UMNO involves party leaders of great caliber, vision and talent which sets the party apart from most of its political rivals. He said that UMNO always empowers its upcoming leaders in order to take on the mantle of leadership being passed down. He said that they are truly tested, has morals and that they are the kind of leaders who can one day direct the country unlike some other parties who have their leaders involved in social issues that only puts a stain on the party’s good reputation.

Zahid claimed that under the leadership of UMNO, the people’s welfare were prioritized and that the party has never given any empty promises as well as never going back on their word which was an indirect attack against Pakatan Harapan. He then calls on party members to keep the spirit of the party’s struggle alive in conjunction with the party’s 75th birthday today.